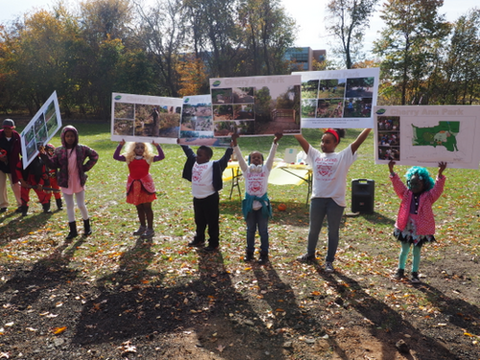 The Urban Resources Initiative (URI) is dedicated to actively collaborating with community members and organizations to increase green spaces and tree cover across New Haven. Colleen Murphy-Dunning, Director of URI, describes the heart and soul URI’s work as led by “empowered community members, doing public service on their environmental priorities and on their land, while engaged with the urban foresters of URI.”

As a community centered organization, URI works closely and in-person with New Haveners, which is something of a challenge with COVID-19. While the virus has not stopped URI’s work, it has slowed the process and has of course required new safety protocols. Since May, URI began installing bioswales in the city again, and in June, tree planting resumed.

With each new reopening phase, URI has rededicated its efforts within the community. This summer, URI has been working with long-term community partners and city government on two major park projects - installation of a splash pad in Newhallville’s Cherry Ann Park and constructing the New Haven Botanical Garden of Healing Dedicated to Victims of Gun Violence in West Rock.

The five-acre Cherry Ann Park, an emeritus or ongoing, long-term project of URI, welcomed a brand new addition this summer - a splash pad. Ms. Connie Vereen and Mr. Mike Rich have been the lead community volunteers, along with many children, working to restore Cherry Ann, which had no investment prior to their galvanizing support to transform the park which was neglected for decades. There had been no maintenance, no infrastructure, and was characterized by invasive species and dumping before community volunteers partnered with URI in 2013. The City of New Haven and other organizations also joined in the effort to reclaim the space. Ms. Connie and Mr. Mike envisioned a safe place for kids to play, and a splash pad has been a long time dream of Ms. Connie finally realized. This piece of progress of Ms. Connie’s mission, as described by Murphy-Dunning, was gifted by a YSE alumna, who during the YSE MODs orientation in 2018 experienced working in the park firsthand. Seeing Ms. Connie’s leadership as well as URI’s commitment to working with Cherry Ann Park, inspired this donation.

Both of these projects are part of URI’s Greenspace Program, which has been running for 26 years with 40-50 community groups and 700-1,200 volunteers participating annually. The groups and projects range in size and interests, including improving parks, restoring vacant lots, or planting street trees, and done so in partnership with the city of New Haven. The vision for each project originates from the community, while URI provides an intern and materials and works at the capacity and pace of each group.

For more information on the developing Botanical Garden of Healing - check back this winter.

For more about on how URI plays a role in environmental justice at YSE and in New Haven, check out “A Summer of Civil Unrest: Racism, Diversity, and the Environment.”