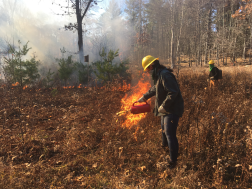 In the past year, wildland forest fires have dominated the news, but despite the prevailing narrative of damage and destruction, there has been continued and growing interest in fire ecology at The Forest School at the Yale School of the Environment. So, what does prescribed burning look like at the Yale Forests?

There are five areas of Yale-Myers Forest (YMF) along the Red Front Trail where prescribed – or planned with silvicultural goals in mind – burning has been part of the Yale Forests’ management of the forest landscape. These areas located in two habitats, the shrub-meadow and the oak-savannah woodland, are burned periodically to promote the conservation of unique habitat types that favor wildlife of the area, ranging from squirrels, wild turkey, and white-tailed deer to pileated woodpeckers, chickadees, and goldfinches. Three of these areas have been burned in the past year.

In Fall 2020, a group of energetic forestry students, Forest Manager Jess Lloyd (’20 M.F.), and Director of Forest and Agricultural Operations Joe Orefice (‘09 M.F.) reviewed YMF’s burn prescriptions, applied for permits from CT DEEP, and waited for dry, calm conditions to burn the 2-acres of the shrub-meadow. The goal? To educate masters students in the role of fire on the landscape and to regenerate open grass and shrub habitat in this corner of the woods. This area was first cleared and burned in 1986 with the intention to promote aspen regeneration, which failed but gave way to a welcomed meadow with naturally regenerated low bush blueberry, raspberry, and blackberry as soft mast food sources for wildlife as well as native goldenrods and sedges. To get better acquainted with this place, its species, and fire, take a virtual tour of the Red Front Trail.

Fire is not currently a main management tool in Northeastern forests, compared to the West or South where fire is a common disturbance in the landscape. As the forests stand in the Northeast now, the canopies are generally closed, sites are more mesic (moderately moist), and the urban-wildland interface makes burning riskier. However, low intensity broadcast burns provide benefits for regeneration in certain areas at YMF.

There is disagreement in the scientific community about the amount of historical prescribed fire use on this landscape, with some arguing against its regularity (Oswald et al., 2020) and others claiming there was some prescribed fire in the Northeast in the past (Abrams & Nowacki, 2020; Roos, 2020). For those scientists in support, they claim fire was used to create and maintain oak-hickory savannahs, like the one bordering the shrub-meadow, which provided hard masts of acorns and hickory nuts for sustenance of deer and Native peoples alike. They also point to settlers’ account, which described a hardwood savannah landscape present at the time of European contact. Perhaps most importantly, Lisa Brooks, an Abenaki scholar and Professor of English and American Studies at Amherst College, described Native peoples’ use of fire as a tool to create oak-hickory savannahs as common practice throughout the Northeast during her keynote talk at the 2020 SAF National Convention.

For Yale Foresters, the fall 2020 burn of the shrub-meadow was an exercise in understanding, respecting, and using the power of “good fire”, considering land-use history over time in the forests, and of course, a welcomed day out in the woods for experiential learning during the COVID era.