Service as an Act of Healing 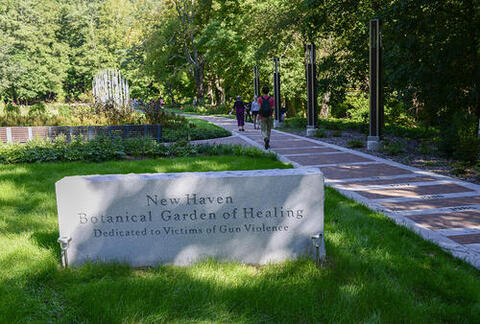 In September, the West River glints golden and sparkles with reflected light as it snakes through the West Rock community of New Haven. Tucked in between the river and Valley St. is the New Haven Botanical Garden of Healing Dedicated to Victims of Gun Violence, a place filled with flowers, light, and dedication to healing from the ongoing crisis of gun violence in New Haven. The garden, which was formally dedicated in June 2021, connects the city to its river, and to the growing power of the land. It is a space to remember those who have been lost to the cycles of violence driven by injustice in our society, and to confront that injustice with the growing power of life and beauty. It came as a result of years of work by a dedicated group of New Haven mothers, led by Marlene Miller Pratt in collaboration the Urban Resources Initiative (URI), a program of  The Forest School at the Yale School of the Environment.

This fall, Marlene, along with two other mothers, Celeste Robinson-Fulcher and Pamela Jaynez, visited the first-year orientation groups at the Yale School of the Environment (YSE). They shared their stories of living and working to heal after losing children to gun violence, and the drive to create a place of remembrance and community. In the room, there was a space held open for students to see the connections between environmental work and the work of creating a caring community, one in which all members, be they students or long term residents, students or mothers or children, see one another’s stories as their own.

“This project is community-driven, it’s community led, it’s their idea of healing and hopefully social activism to stop gun violence. But its primary purpose was a way to remember the children whose lives were lost to gun violence, that they mattered, that people care, and that in itself is healing,” said Murphy-Dunning. 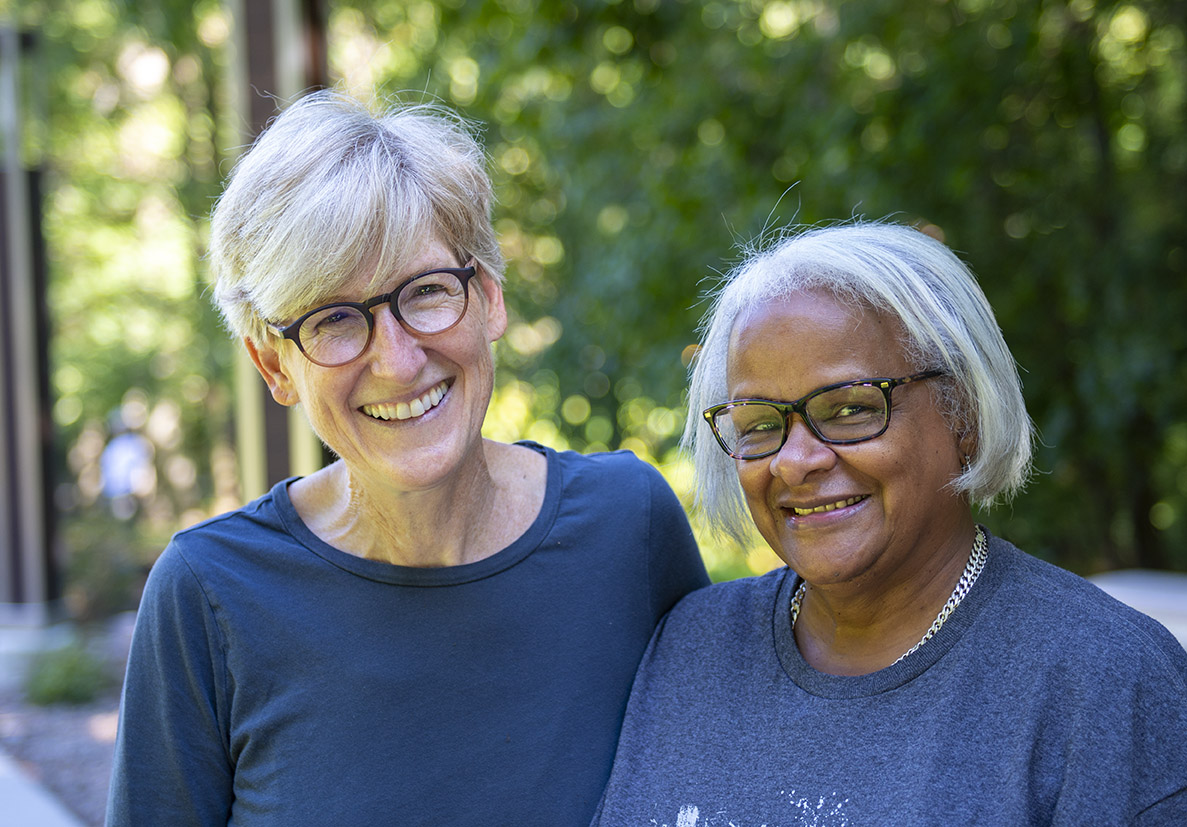 And students did care. Weeks later, on one of those bright September mornings this fall, as the hollies and mountain laurels danced in the morning breeze, over 40 students from the Yale School of the Environment arrived with a team from URI to volunteer: pulling weeds, shoveling mulch, and planting trees, to maintain and expand the garden. 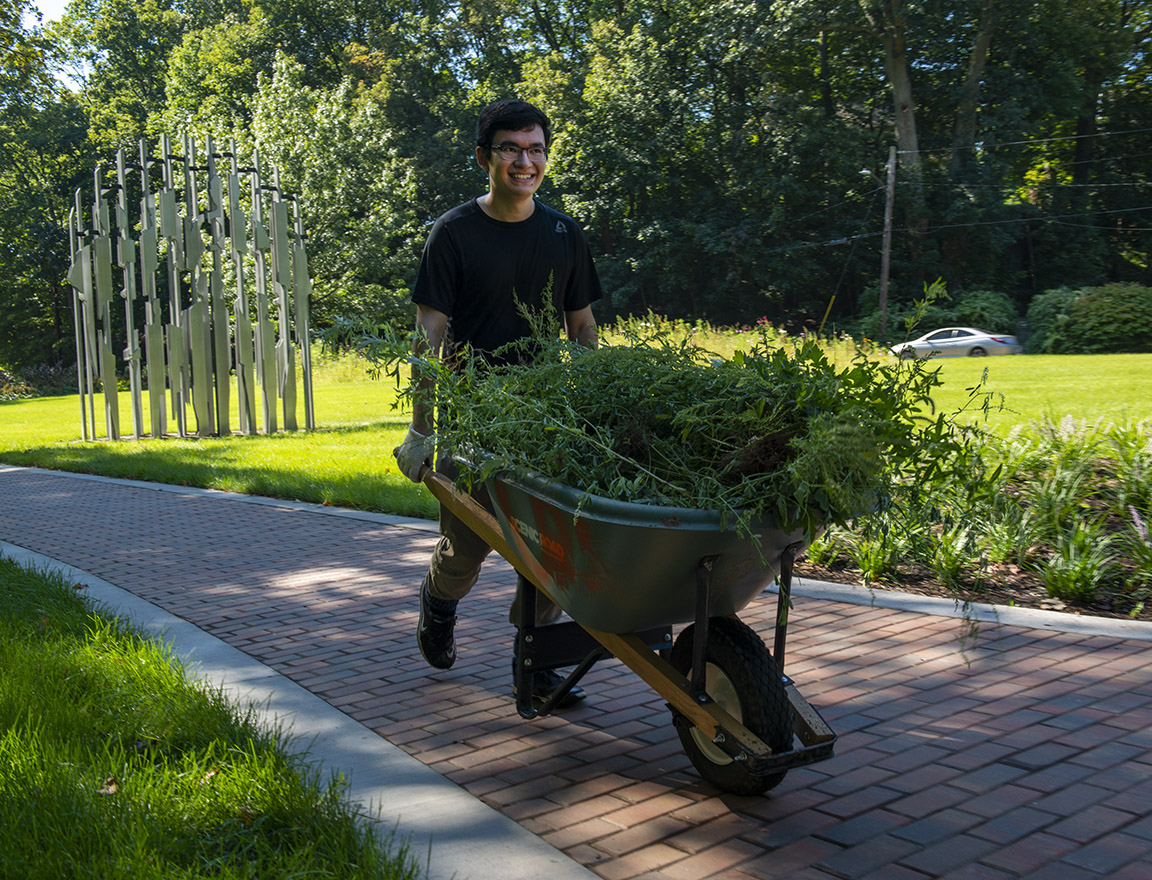 The students walked gently on the brick-lined pathway through the garden; the bricks are inscribed with the names of those who have been lost. 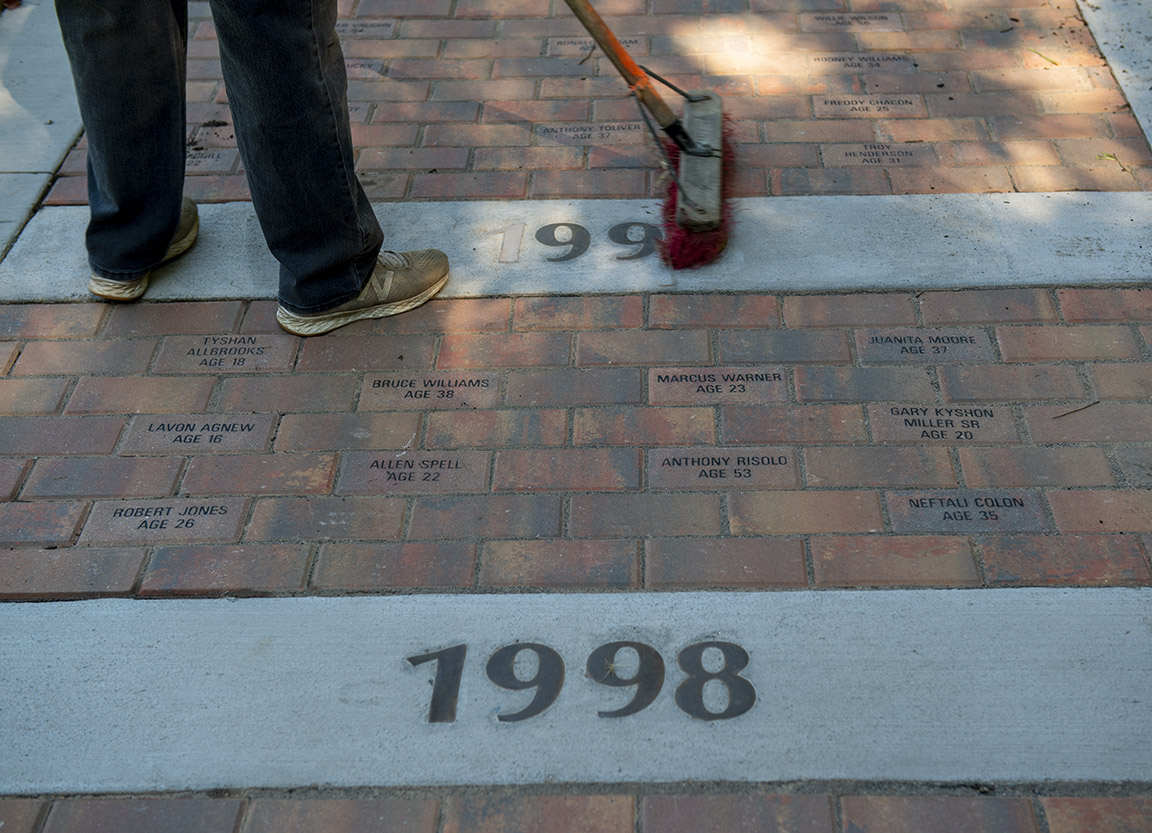 Bricks inscribed with the names of victims of gun violence in New Haven line the path of the Garden. Photo: Mike Doolittle.

Asked what they feel when they come to the garden, Marlene and other community members such as Damonne Jones spoke of serenity and peace, of working and feeling close to the earth.

Students came out to volunteer through this year’s September of Service, a project started last year by Taryn Akiyama ’21 MEM and Brett Cozzolino ’21 MEM as a way to get together in service of their new community when classes moved primarily online. This year, second year students Cristina Barrera ’22 MEM, Carolyn Savoldelli ‘22 MESc, Jhena Vigrass ’22 MEM, and Ashley Felix ’22 MEM/MBA carried on the work of organizing the September of Service tradition, and third year student Kate Meyer ’23 MEM/MBA helped to organize the volunteer workday at the Botanical Garden of Healing. Meyer first met the mothers’ group during the orientation modules (MODS) in 2019 and was inspired by their positivity in the face of extremely difficult events and their motivation to make a positive change in their community. She has returned to volunteer in the garden on several occasions, watching the park develop from an empty dirt lot construction site to the vibrant garden that exists now. 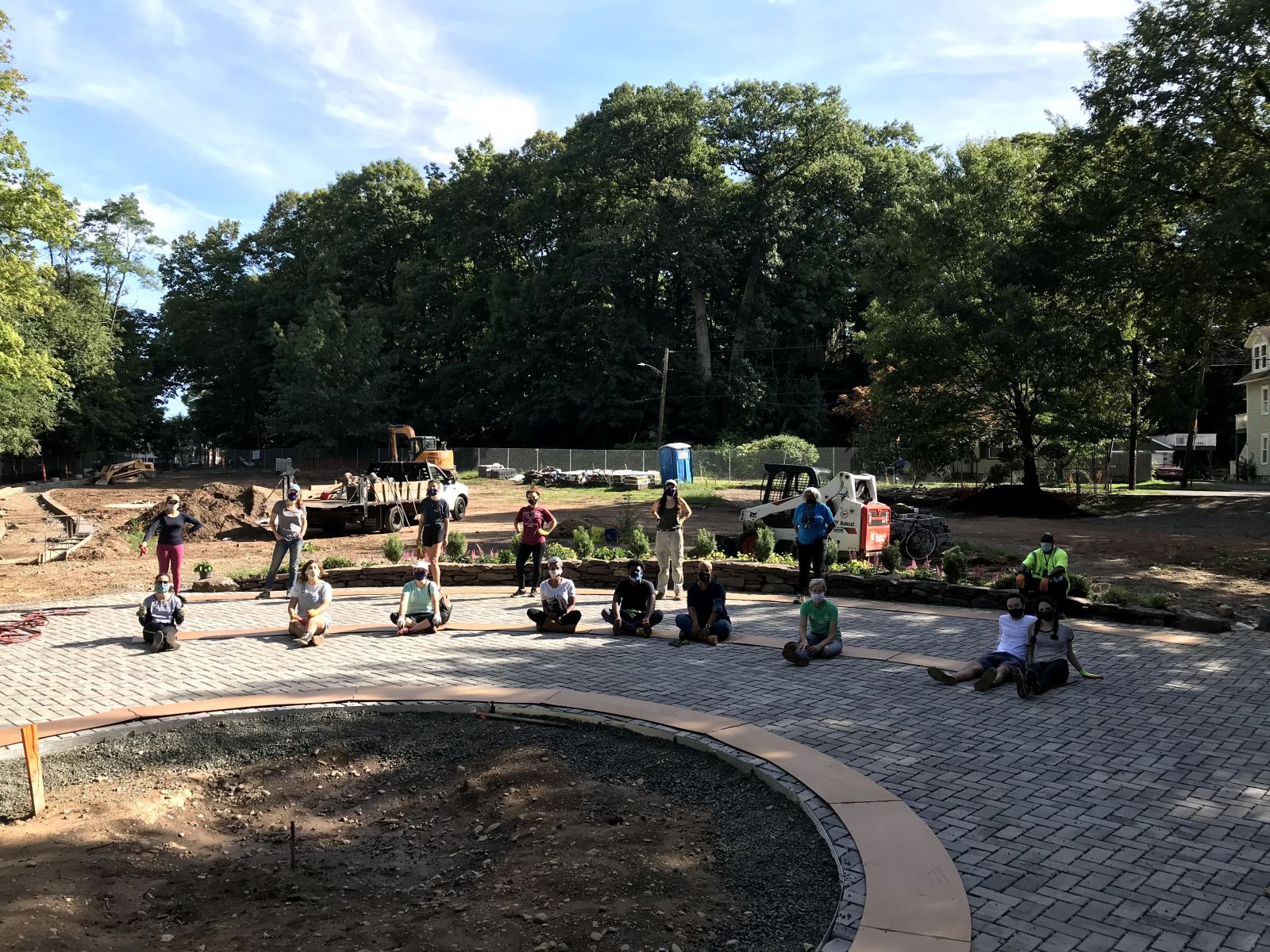 The Garden has come a long way since it began as a dirt lot in 2019. Photo: Colleen Murphy-Dunning.

She reflected on the importance of students getting into the community, out of the institutional bubble, and following the examples of local leaders: “This shows the power of really thinking locally and where you are place-based, and the impact that you can have when people get involved.” 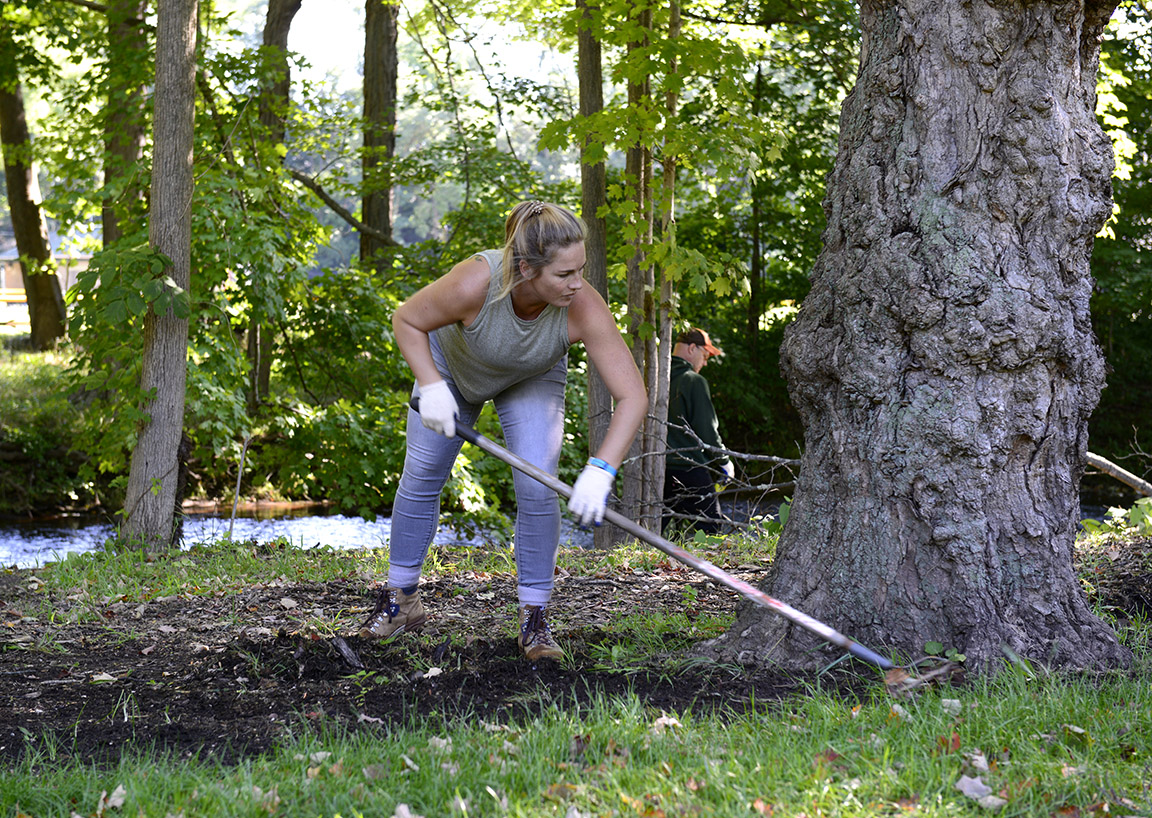 Amalta Gupta ’23 MESc came because “we read the news, but we still aren’t aware of the magnitude [of gun violence]…we were introduced to this work during MODS and the stories of Celeste and the other mothers really moved me, and I wanted to help out in whatever way I could”. She said: “It’s empowering and hopeful to have so many people come out. It should be a regular thing and not just a September thing.” Epongue Ekille ’22 MEM was touched by the stories the mothers told and the resonance with challenges in her home city of Rochester. She came to give back by following the example of her father and spoke of the power of service in confronting feelings of helplessness when facing ongoing structural issues. She was invigorated by the sun and the joy of working in a large group to accomplish a shared goal. 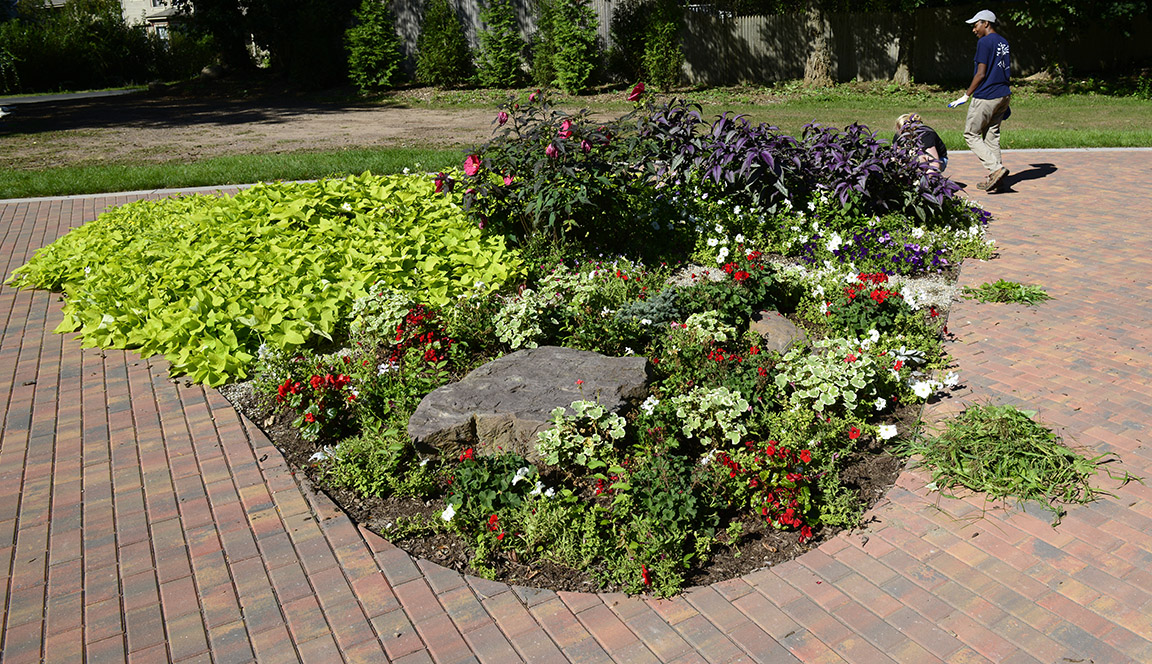 Sofia John ’24 MEM/MBA echoed the excitement of having so many people come out to work together, and also that walking down the path at the garden drove home the fact that the issue of gun violence is ongoing in New Haven. “It is a heavy thing to hear that even now, they are continuing to order more bricks.”

Only last winter, YSE student Kevin Jiang, who would have graduated in 2021, was lost to gun violence. This fall, 9 more bricks were installed on October 2nd. There are many facets of confronting a problem as devastating as gun violence in American cities, and public memorials and gathering places are just one avenue toward building communities that support the lives of all residents.

That is the duality of healing that the space represents, the need for healing means that the pain exists, but might be overcome. The words people use to describe the garden all speak to the power that life and green growing plants can hold in confronting the darkness. “There is a meditation in weeding and working towards giving back in some small way,” said Gupta. “This is a place of serenity” said Jones. “This is a peaceful place,” said John, “Before I was a grad student I was a regular volunteer at a local park, but I never knew that this place was so beautiful with the river running by it and such a diversity of plants.” West Rock rises high over the botanical garden’s horizon, the river carries with it late summer birdsong. 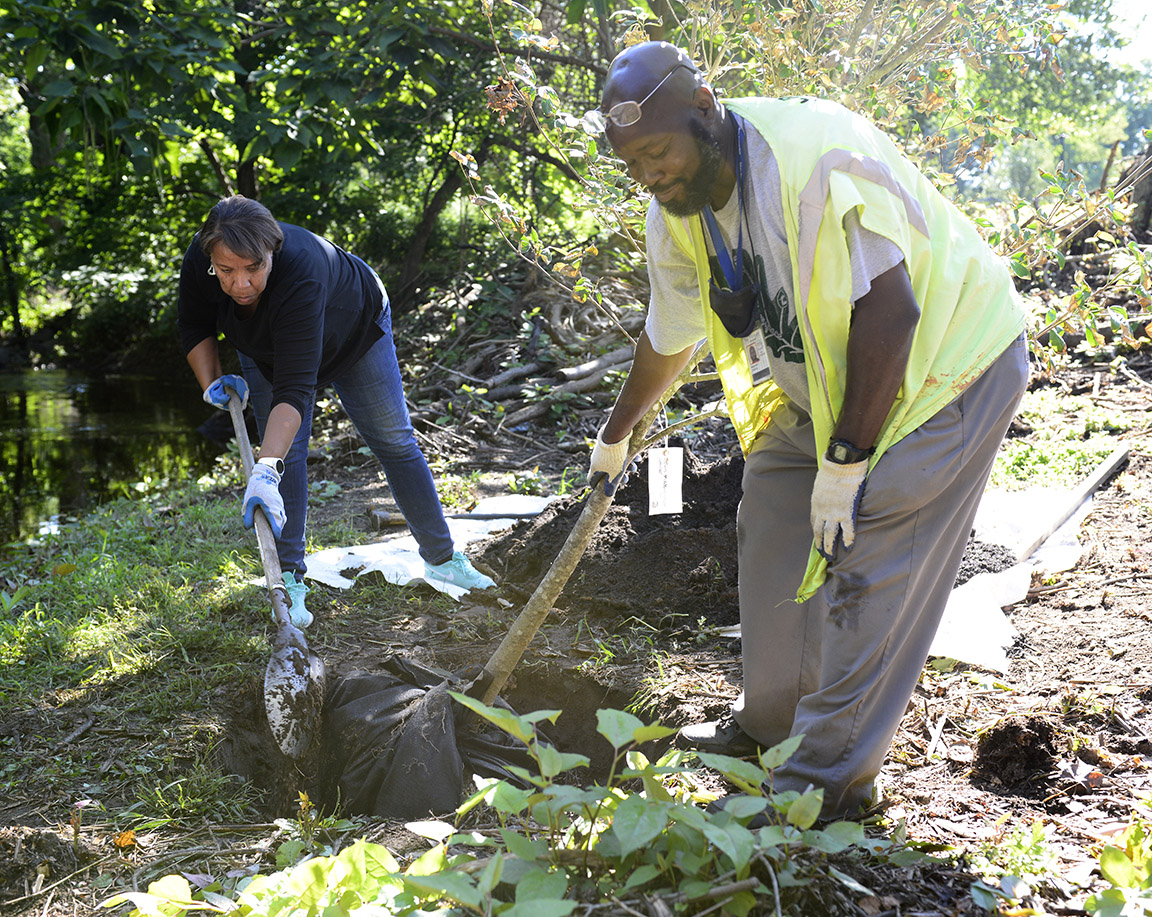 Marlene said she feels immensely supported by the work that students are doing in the park and she wants to see more student involvement in the future, not only in planting and weeding but also in mentoring New Haven youth. She wants to see even more community involvement in the park, so that even more community members can heal through the space. “I just wish I could see more of the families here,” said Miller Pratt “because if they gave back, oh my god, they just don’t know the healing. I know I’ve healed because this is something I did for my son, not just for my son but for every other parent in New Haven. But it feels good knowing that my son is not forgotten.” 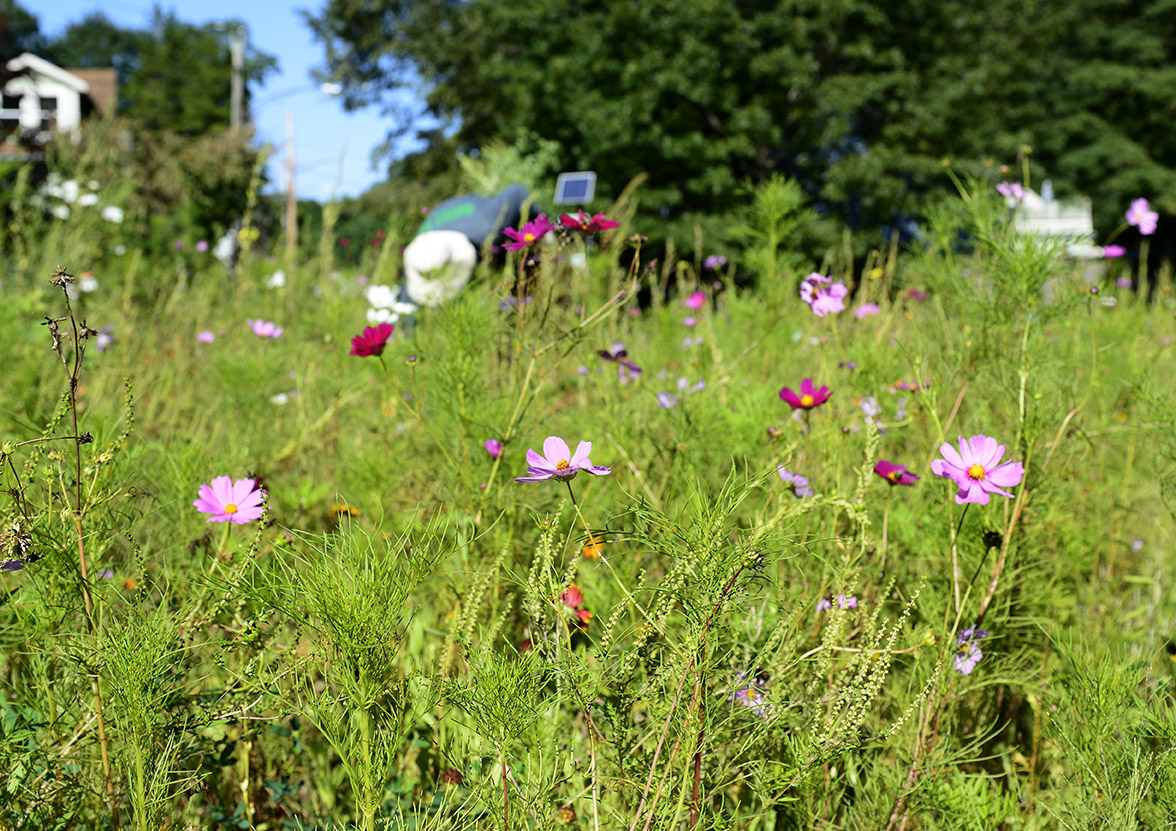 For updates on this unfolding creation, visit the project’s page (link is external) on the URI website.