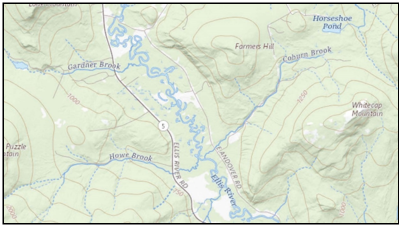 He inspired a student, in a 1978 course, to see the ordinary surrounds with new eyes.

French-curves turning dos à dos,
forming or having formed bows,
owe first to the fact of gradient
because a floodplain, appearing level,
is a valley nonetheless, thus declines.
Slacker water equaling deposition,
sand accretes as wedges inside
even an incipient bend. Cut-banks
line the outside because
faster waters excavate.

There, hunkered in cool
hollowed pools, brookies
and rainbows congregate, hang
aquiver, snouts into the run, to reap
from upriver the constant larvae,
bugs, algae and motley other
yummy keep of detrital gulp
riding the widening
perimeters’ centrifugal flows.

Being a neutral expedient,
hydrologic has no artistic end.
Yet consequent to every non-turbulent
water’s descent, opposed banks align
in fair complement, evincing contrary
angles of bevel, and—tenets
aesthetic and plane geometric
both met—are agreeably congruent.

In the geologic canon, phantom
horseshoes scored into riverine
terrain or plotted on maps are called
meander scrolls or scars, or dead
meanders. (Pray not lose the visual
literals of a science whose exquisite
argot rivals music’s.) A term of like
euphony is thalweg—the mildish
corkscrew of subsurface flux
within every benign current—
which my impaired ear first heard
as thalway. “Way,” I thought,
was the sloughing susurrus
of sediment, versus
the guttural “weg” that gouged,
bruiting its mineral loot
from the riparian margin.
Thalweg, I now know, denotes
the natural sinuosity of laminar flow.

(Release a dollop of Red Dye No. 2
into a staid drift, it swirls away
and filigrees like a dancer’s ribbon.)

Ingénue curls of docile H2O carve
their surrounds. Unremittent, they
whittle at a straight via helical asides,
wriggle scarps into languid arcs,
coax linear troughs to alternating,
re-curvilinear reaches that grow
too lopsided-round that each
upstream reach in time rolls
prolapsed into its downstream fellow
and severs, etchwise, their rotund
common oxbow.

In the legal profession’s
efficient construction, thalweg,
rendered raw, is “the deepest
centerline of a river,”
a court delineation sufficient,
one guesses, to adjudicate
boundary cases.

On the current matter
of indolent esses, however,
I am not licensed to commit
law, nor geology, let alone poetry,
but submit only that flatwater,
like genius, follows a native bent. 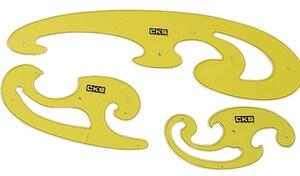 Ken Olson, MFS 1980, was a Guest Fellow of Yale College and lecturer in the American Studies Program, and a visiting lecturer at Wesleyan University. He was chief executive at The Nature Conservancy of Connecticut, American Rivers, and Friends of Acadia, retiring in 2006 from a three-decade conservation career. He lives on the Maine coast.