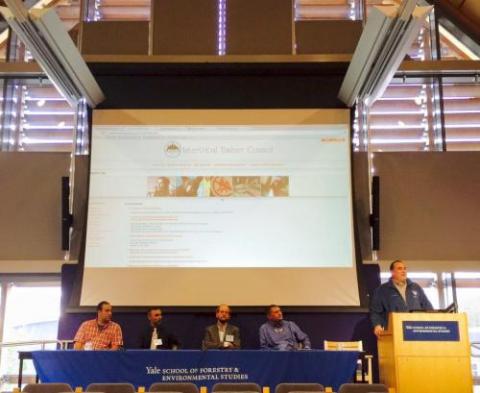 On October 16th and 17th, the Global Institute of Sustainable Forestry partnered with the Intertribal Timber Council to convene Yale’s first Intertribal Timber Summit. The event brought together 67 participants, including tribal forest managers and students, federal officials, academics, and Yale students to discuss topics in tribal forestry. Participants joined the event from across the country, ranging from the San Carlos Apache Tribe in Arizona to Salish Kootenai College in Montana to the Bureau of Indian Affairs in Washington D.C., among many others.

Initiated by Intertribal Timber Council president and F&ES alumnus Phil Rigdon ‘02 M.F. and former F&ES Dean John Gordon, the event addressed recent findings of the IFMAT-III, a federally commissioned assessment of tribal forests. Some of the key findings from the report revolved around impacts of the federal-tribal trust relationship on tribal forest management, and the development of a robust natural resource workforce to manage tribal lands.

The first day of the event was dedicated to presentations given primarily by forest managers and federal government officials, who addressed challenges and successes that they had experienced in their respective regions. The range of these presentations demonstrated variation among forest management practices in different geographic regions, and also drew out common problems shared by many forest managers, such as insufficient resources and increasingly destructive forest fires.

The second half of the Summit made space for small groups to discuss the previous day’s topics in greater depth and to bring their thoughts back to the larger group. This process brought together experienced managers, visiting students, and Yale students to learn from each other and brainstorm potential solutions to problems raised by presenters and the IFMAT-III. Several core ideas that crystallized out of these sessions included the need to bring federal funding for tribally managed forests up to par with funding for management of federal lands such as national forests, and the important role that mentorship and support networks play in Native American students’ success.

The conference proceedings concluded with a performance by the Blue Feather Drum Group, Yale’s student-led Powwow group. That evening, fifteen visiting students spent the night at Yale-Myers Forest, where they explored the woods and exchanged knowledge with F&ES students from the “Management Plans for Protected Areas” course.