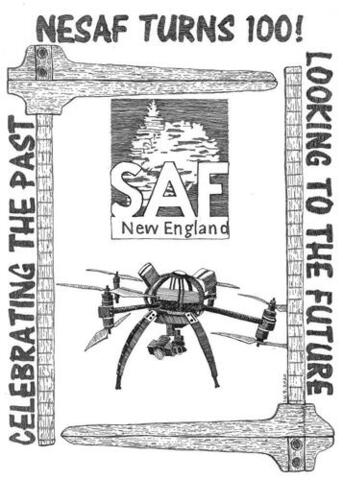 This winter, the New England Society of American Foresters (NESAF) celebrated its 100-year anniversary. Well, technically NESAF celebrated its 101st birthday, as the pandemic prevented last year’s centennial gathering. Over the past century, The New England chapter of the Society of American Foresters has strived to steward the Northeast’s forests while meeting society’s needs. In the words of the 2021 NESAF Chair William Hill, the virtual commemoration “focused on our roots and where our different branches are leading us into the future.” Adam Moore ’92 YC, ’95 MF, general chair of the NESAF 2021 Winter Meeting, organized this event, which included presentations by him and many of his fellow Yale foresters.

By celebrating the past and looking to the future, as the conference’s tagline inspires, we at The Forest School at the Yale School of the Environment reflect on what it means for us to have been practicing forestry in the Northeast for over a century and how we continue to contribute to NESAF and to forest research in New England more broadly. We counted nearly one-third of the over sixty speakers and facilitators of the conference were Yalies.

Apart from Moore, there were several other alums who provided plenary talks. Senior Associate Dean of The Forest School and member of the 2021 NESAF annual planning committee Mark Ashton ’85 MF, ’90 PhD expounded upon the biophysical history of forest science during the first day of the annual meeting. In his talk the “History of Forest Science – New England Roots,” Ashton took us back to 1900, when the Yale Forest School was founded and, in those years preceding NESAF’s establishment, to tell the story of bursts of Western scientific research and the legacies of researchers that have shaped the knowledge we have about today’s forests. Steven Roberge ’05 MFS presented on the current state of New England forestry and where he thought it was going into the future.

Ashton and Roberge were followed by many other Yale foresters at the winter NESAF gathering. Joseph Orefice ’09 MF and Karam Sheban ’20 MF both presented and moderated a discussion on Agroforestry and Non-Timber Forest Products, speaking on how environmental factors affect the planting of ginseng and on silvopasture regenerative strategies and methods, respectively. Mike Ferrucci ’81 MF and Tim Hawley ’76 MFS discussed the reality of being foresters who have unexpectedly found themselves in the role of “carbon and forest management activists.” Terry Baker ’07 MF, CEO of SAF, talked about his vision for the future of forestry. In a separate session on oak hardwood forest regeneration moderated by Ashton, Jessica Wikle ’18 MFS and David Woodbury ’19 MFS, PhD student presented and discussed their findings on forest regeneration research from plots in a thirty-year chronosequence of shelterwoods, and on the successional development of some of the oldest continuously monitored gap studies in the nation set up by David Smith ’46 MF, ’50 PhD at Great Mountain Forest. Urban Resources Institute Director Colleen Murphy-Dunning, Clara Pregitzer ’20 PhD, Danica Doroski ’16 MFS, and Caroline Scanlan MF ‘18, connected the conference to urban forests, presenting on thinking beyond the backyard, tree composition and diversity in Northeastern cities, vegetation patterns of natural areas in cities, and URI’s university model for urban forestry education. Nancy Marek ’09 MFS spoke on invasive species detection. Finally, Amanda Mahaffrey ’02 YC, ’04 MF and Lloyd Irland ’76 PhD presented a workshop on forestry ethics in practice.

With such a strong presence of Yale foresters and forest scientists at the gathering, it is certain that forest research coming out of The Forest School will continue to be influential in the coming decades. More to come on this in future issues of The Overstory as we delve into the past and potential future contributions to forestry by faculty and students from The Forest School.