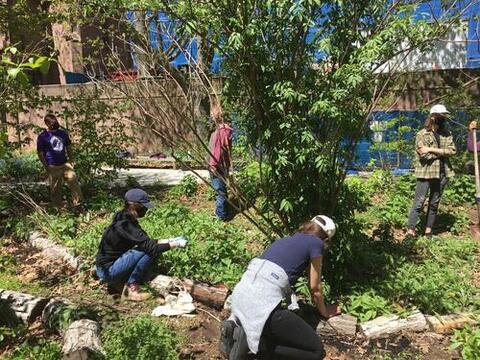 Walking past the inviting courtyard between Kroon and Sage Hall, you would never guess that just five years ago the space was an unruly thicket of overgrown opportunists. Today, this landscape bursts with life: flowers, shrubs, trees, and even fungi have all been carefully cultivated here. Though the garden sits at a busy crossroads in the middle of Science Hill, its multistory structure, native plant abundance and high incidence of birds and woodland animals combine to give it the feeling of a secluded forest. Biodiversity abounds, but the dozens of different native plants growing here all have something special in common: they are all edible.

This is the Yale Community Forest Garden, a student-managed and community-centered edible landscape, which places a special focus on native edible plants. The garden was inspired by a course taught at YSE by Eric Toensmeier called “Multifunctional Carbon Sequestration Agroforestry.” Agroforestry is a term which applies to several different kinds of food cultivation systems which incorporate woody perennial species into their design and management. Such systems can have many socio-ecological benefits, including, in some cases, increased biodiversity, improved resiliency, and provisioning of ecosystem services, such as mitigating erosion, reducing local temperatures, or sequestering carbon.

The course offered students the chance to learn about agroforestry as it is practiced in different contexts around the world, and to implement what they learned in a final project. As her final project, Emma Akrawi ’16 MEM decided to adopt the courtyard and transform it into a forest garden, where edible perennial species would be arranged according to principles of stand dynamics and other tenets of forest ecology. In the spring of 2016, together with dozens of excited students, faculty, and staff members, Emma cleared the site of its towering dogbane, mugwort, and Japanese knotweed and planted the beginnings of the garden.

When Emma graduated, she worked with me—an incoming MF—to transition leadership as I became the garden’s first official steward. I came to Yale with a background in permaculture and community agroforestry, and I couldn’t believe how lucky I was to get to continue this work at Yale. Because forest gardening is such an unfamiliar form of landscaping for most people, I wanted not only to cultivate all kinds of delicious foods, but also to cultivate a communal sense of ownership and belonging in the space. For this reason, everything we organized in the garden was a community event, a chance for people to learn about agroforestry and physically connect with the landscape that surrounds them every day.

Over the last five years we’ve hosted more than 50 workshops on topics such as soil building, rainwater management, earthworks, year-round planting and harvesting, mushroom cultivation, and much more. We also collaborated with other schools, departments, centers, universities, experts, and enthusiasts from across the region to bring different skills and perspectives into the garden. Some of our most memorable events included collaborations with scientists and artists. In one such event, we hosted a plant physiologist, a sculptor, and a sound designer who worked together to connect different plants in the garden to sensors which translated their electro-chemical signaling into music. Visitors got a chance to walk around the garden, listen to all the plant sounds, eat ice cream, and hear the collaborators talk about their work. These kinds of events helped bring together a diversity of different people and ideas, reflecting the diversity of species and lifeforms in the garden.

Hazelnuts, acorns, Jerusalem artichokes, strawberries, paw paws, beach plums, black currants, perennial onions, spicebush, and serviceberries are but a few of the native edible treasures found in the garden. Plants aren’t the only gems in the garden; edible mushrooms have been incorporated in synergistic ways to improve soil structure and nutrient cycling. The logs (sourced from the Yale-Myers Forest!) lining the garden paths have been inoculated with different strains of shiitake, oyster, lion’s mane, and maitake mushrooms. These logs break down over time, serving as coarse woody debris for a bevy of beneficial soil insects and pollinators. Larger stumps are stacked into mushroom statues in the garden’s shrub layer, and these too regularly sprout bountiful crops of choice edibles. Woodchips do double duty in the forest garden; in addition to serving as healthy mulch, they are also inoculated with delicious wine cap mushrooms.

This remarkable abundance was possible to achieve in the span of just five years thanks to strong community support, careful ecological planning, and observation of existing systems and flows. The garden nourishes our community not only by sharing its abundance of food, but also by serving as a gathering space, a site to build ecological literacy, and a place for retreat and relaxation. Perhaps most rewardingly, unlike some kinds of ornamental landscaping or conventional agriculture, this abundance has not come at the expense of soils, wildlife habitat, or freshwater resources. Instead, the garden functions as a space for mutual flourishing, helping to build robust soils, provide urban wildlife habitat, and harvest rainwater while preventing runoff.

It has been a true pleasure to serve as the forest garden steward over the past five years. As I graduate and pass the role on to a new steward, I feel both contented and excited. I can’t wait to see what abundance the next five—and the next fifty—years have in store for this cherished space.

The Yale Community Forest Garden has been made possible through the ongoing support of the Class of 1980 Fund.  The School is grateful for the Class of 1980’s dedication to our community, including tending to this forest garden at our home on campus!