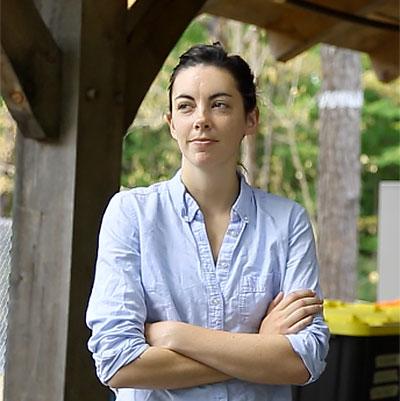 As new manager at Yale Myers Forest, Shannon Murray ’14 M.E.M. certainly has had her hands full. But despite some challenges, including a devastating fire in May, she says it’s been an enjoyable summer at Yale Myers — and that the camp will be ready for summer MODs.

Some might have expected the summer work at Yale Myers to screech to a halt after a three-alarm fire destroyed several buildings over the Memorial Day weekend. But Shannon Murray ’14 M.E.M., the new forest manager, says research, student programs, and forest operations have continued despite the devastating fire. And construction is nearly complete on a new auditorium, which will be used for the upcoming new-student orientation in August.

We caught up with Murray to discuss the status of construction at Yale Myers, her new job, and future of Yale’s most iconic forest.

Q: What is the current status of the Yale Myers campus?

SHANNON MURRAY: The rebuilding effort is moving forward, thanks to a lot of energy from the university and the alumni community. A new timber frame auditorium was built this summer, and it will be a central space for MODs in just a few short weeks. The structure (which had already been a planned addition to the camp) was funded through the Class of 1980, and much of the wood was sourced from within a few miles of the site. We’re excited to have the auditorium as a new educational space, and construction will begin on our other camp buildings shortly.

Q: You are starting your position during a time of dramatic transition. How has this summer been for you as the new forest manager?

MURRAY: This summer has moved incredibly quickly, and there has been a learning curve to managing the camp on a daily basis, working with the forest crew, and helping to coordinate the rebuilding effort. It’s definitely been important to have Julius Pasay [’14 M.F.], the previous forest manager, who was here for the first half of the summer, and Mark Ashton, F&ES professor of silviculture and director of School Forests, as mentors. It’s been an energizing (and sometimes exhausting) summer, and I’m looking forward to working with the School Forests over the next couple of years.

Photo by Dana Patterson
The new Class of 1980 Pavillion, a 1,040-square-foot auditorium built on the edge of the main camp, will be completed this summer. An open-air, multipurpose gathering space, it will be used for a variety of programming, including classes, lectures, film, and theater.

Q: What are some of the modifications you’ve had to make for summer researchers and the Apprentice Forester program?

MURRAY: We have a slightly smaller group living here than originally planned, but most of our programs moved forward after a slight delay while we reorganized camp. Several labs at F&ES have long-term research and special projects here, and those researchers have continued their work. We also had several visiting students from other universities living with us this summer, but had to scale back on our undergraduate research program this year. The Apprentice Forester program is going strong, and the crew has been out managing their division of the forest every day. The biggest change this year is that many people have spent the summer sleeping in tents, and we’re spending the majority of our time outside. Luckily, we have a great community of people here, and everyone has made this a fun experience despite the changes in living conditions.

Q: How will MODs be different at Yale Myers this year?

MURRAY: The ecosystem measurement week of MODs will still be held at Yale Myers this year, and the team of teaching fellows is looking forward to getting incoming students out in the forest. We’ve added some temporary housing to help supplement the current living conditions at camp, and will have a few more people in tents than in previous years. But that’s one of the best parts of MODs! The most significant difference this year is that we’re shortening the week here by one day so that we can keep logistics running smoothly at camp. The MODs team has done a great job making tweaks to the curriculum so that incoming students will still get a full experience during their three days here.

Q: What has been the response of the local community to the fire?

MURRAY: Many of the surrounding landowners have a close relationship with Yale-Myers through the Quiet Corner Initiative, special events, or simply through hiking in the area. We’ve had a lot of support from our neighbors, and many people have continued to join us at camp during the evening seminar series and workshops that we host each summer.

Q: At this point, what is the vision for the Yale Myers campus moving forward?

MURRAY: Construction is scheduled to start this fall, with the goal being to have the camp rebuilt for next summer. There will be a few minor layout changes, but the bunkhouses, classroom, kitchen, office, and common areas will be rebuilt in the style of the original camp. A new research building had already been planned at a site up one of the forest roads, and construction will be moving forward on this at the same time. So the Yale Myers camp will look quite different a year from now.