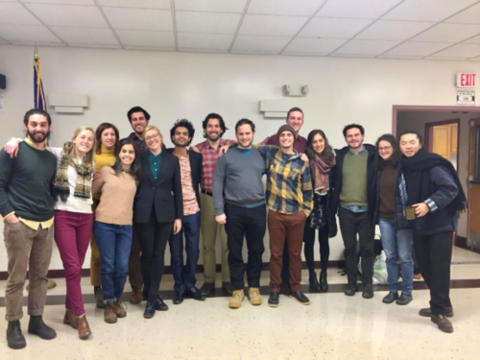 The Society of American Foresters is not only the national professional association and accreditation of our Masters of Forestry, but also a longstanding student social group at the School. During the 2019-2020 school year, the group has undergone some forward-looking changes while keeping community at the center of its goals and activities, including an impressive recognition of staff, students, and alum at the SAF National Convention.

The 2019-2020 student leadership of the Yale SAF chapter were eager to continue building upon the momentum of deepening the sense of community across forestry students that has been central to past leadership goals. One such endeavor was a formal name change of the student interest group (or SIG) from the Society of American Foresters (SAF) to Yale Temperate Forestry (YTF). This shift is not a departure from the school’s relationship with SAF or from the cherished activities of the student group, but a concerted effort to welcome the diverse range of perspectives, disciplines, and professional missions of Yale’s foresters, who work in many the geographies and cultures of North America and beyond. Through the name change, YTF leadership opened up the student organization to be a more inclusive body, one that also represents the Forest Stewards Guild (FSG), for example, which students now have membership access to as of April. The name distinction also strengthens the temperate forestry community at Yale, bringing in any student interested in the topic from the broader YSE community. In some ways, the name change to Yale Temperate Forestry parallels Yale’s International Society of Tropical Foresters, distinguishing geographic interests of the two leading forestry organizations at the School.

As a renamed group, YTF has not abandoned its most beloved activities but has instead enhanced participation. In November and December, YTF organized its annual holiday tree harvest from the tree farm at Yale-Myers Forest (YMF). Master of Forestry and Master of Environmental Management students participated in this long-time tradition on the drumlin, clearing away grasses from the pines, harvesting this year’s desired crop, and wrangling infamous mountain laurel. With YMF now more accessible to non-foresters, students gathered at camp on their winter retreat to make laurel wreaths and load trees to sell from Marsh Hall for the holidays. This major bonding experience and sale supports many of YTF’s programming, including attending the annual SAF National Convention.

Attending the SAF National Convention is at the top of every Yale Forester’s wish list. In October 2019, YTF sent 23 Yalies to the convention in Louisville, Kentucky for a long weekend of learning and invaluable bonding. Here, students represented the program at Yale’s booth, ran into prior classmates who are now working in the field, listened to presentations on cutting edge research, and received advice (and share lots of laughs!) from alum at the school’s intimate happy hour. Alumnus Dan Jones (B.A., M.F.) graciously hosted students at The Parklands, an impressive set of urban parks along the Floyds Fork open year round to the greater Louisville community for biking, hiking, fishing, education, and recreation. In the words of YTF Vice President Devon Ericksen (M.F. ‘20), “We got to see Dan’s work matured and finalized. We often see early stages of projects and don’t often see them to completion.” This YTF organized field trip at the convention opened students’ eyes to what Yale Foresters are capable of planning and executing in their communities. 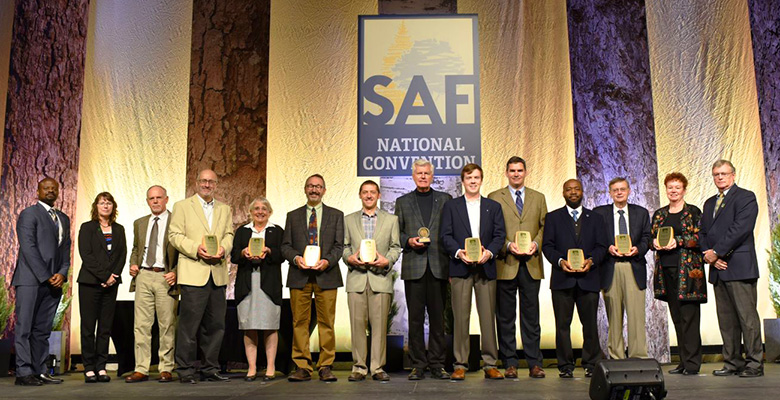 On the final night of the convention, Yale Foresters made their presence known on stage. Alumnus Terry Baker (M.F. ‘07) and CEO of SAF, bestowed two awards to Yale Foresters. The first was the SAF Diversity Leadership Award to Thomas Easley, (M.F. ISU ‘00, Ed.D. NCSU ’13) YSE’s Assistant Dean of Community and Inclusion and the second the SAF Diversity Scholar to Tevin Hamilton (M.E.M. ‘21). Both awards recognize SAF members who display the ability, talent, and skill to lead innovative and exemplary diversity and inclusion efforts. Proud of our community members’ accomplishments, Terry and students took to the stage, dancing to music playing during the celebratory reception.

As this eventful school year comes to a close, YTF is looking toward the future. YTF hopes to be part of the effort to build more unity amongst SIGs, contribute to our vibrant student life, help coordinate changes within the new School, and continue connecting the forestry community to Yale-Myers Forest.