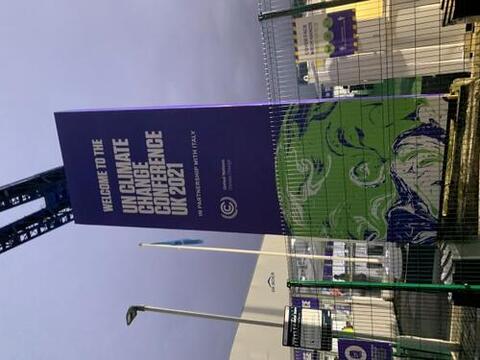 The United Nations Climate Change Conference in Glasgow (COP26) created international buzz. On Twitter, the conference had its own hashtag and globe-shaped emoji. Online and in person, hope for the future collided with the outcomes of negotiation. The imbalance of power dynamics was clear in Glasgow. It is well-known that the richest countries are responsible for the majority of CO2 emissions and are the most stagnant when it comes to taking action to correct course. 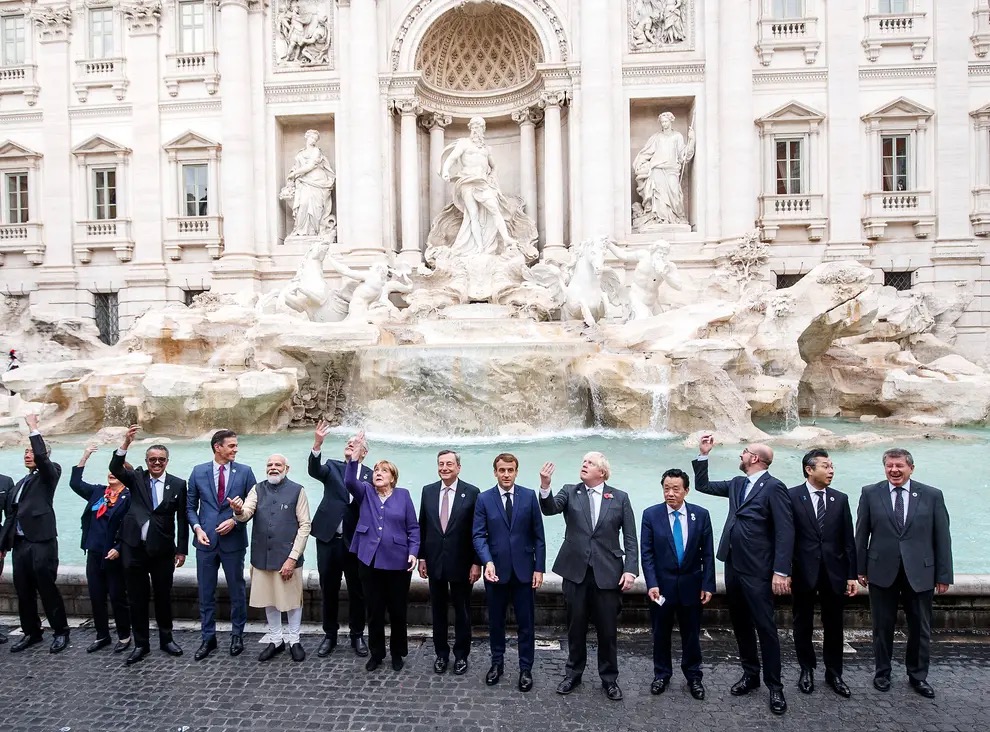 G20 leaders, the global leaders representing the world’s largest economies, tossed coins over their shoulders at the Trevi Fountain for good luck ahead of negotiations; meanwhile, on the frontlines of climate change, Foreign Minister Simon Kofe of the Pacific island nation Tuvalu addressed COP26 in knee deep ocean water, demonstrating that his home country is sinking from sea level rise. Where does this put us and how do we make sense of the outcomes of the conference — especially regarding the role of the world’s forests? We ask members of the Yale Forestry community to weigh-in with their experiences and expertise particularly focusing on the Glasgow Leaders’ Declaration on Forests and Land Use. 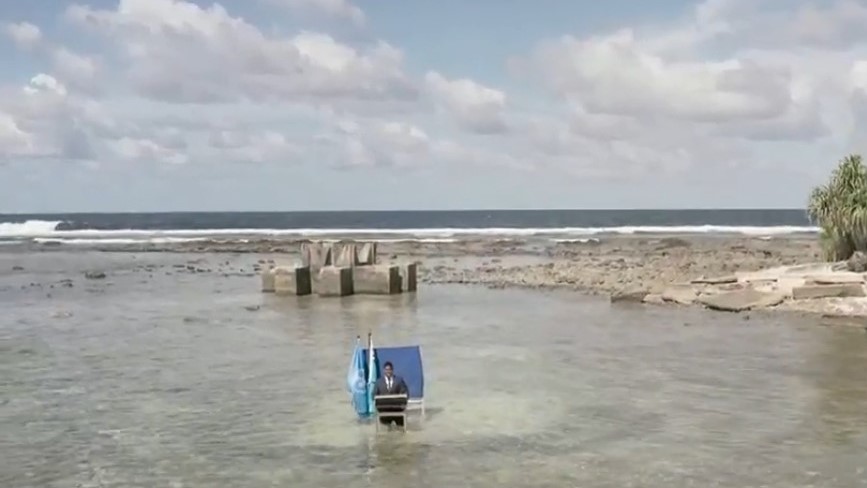 Tuvalu’s foreign minister gave a speech to COP26 on Nov. 8, standing in the ocean to show how his Pacific island nation is on the front line of climate change. (Reuters). Photo and caption from “Sinking Tuvalu prompts the question: Are you still a country if you’re underwater?” The Washington Post, November 9, 2021.

“The Glasgow Leaders’ Declaration on Forests and Land Use was one of the most significant forest and land use pledges made during COP26,” says Yvonne Shih ‘22 MEM, a program associate who supports The Forests Dialogue’s Forest & Climate Initiative at Yale. The signatories of the Glasgow Leaders’ Declaration on Forests and Land Use “emphasize the critical and interdependent roles of forests of all types, biodiversity and sustainable land use in enabling the world to meet its sustainable development goals; to help achieve a balance between anthropogenic greenhouse gas emissions and removal by sinks; to adapt to climate change; and to maintain other ecosystem services,” according to the official site.

“The significance of the Glasgow COP in bringing focus to the critical role of forests, nature and land — not only for tackling the climate crisis but also for helping improve human resilience — cannot be overstated,” explains Kerry Cesareo ‘01 MEM, who serves as senior vice president for forests at World Wildlife Fund-US (WWF).

As of November 2021, 141 countries around the world have signed on to the declaration, thus covering 90.94% of the world’s forests. This translates to 3,691,510,640 hectares or 14,252,996 square miles of forests covered by the endorsers. This includes “several notable tropical forest countries like Brazil and Indonesia,” Shih notes.

In an optimistic move, the United States is on board. “Specifically, the U.S. recognizes that eliminating global illegal deforestation would contribute meaningfully to the effort to reach the Paris goals,” explains Shih. “The U.S. intends to engage collaboratively with other countries in support of eliminating global illegal deforestation through effectively enforcing its laws on banning illegal imports.”

The signatories from around the world “reaffirm our respective commitments, collective and individual, to the UN Framework Convention on Climate Change and the Paris Agreement, the Convention on Biological Diversity, the UN Convention to Combat Desertification, the Sustainable Development Goals; and other relevant initiatives.”

How does the declaration line up with previous agreements?

This is certainly not the first declaration on forests. “Many note this pledge looks very similar to previous commitments to reverse deforestation, including the 2014 New York Declaration on Forests, that failed to meet its expressed goals of halting deforestation by 2020,” explains Luca Guadagno ‘21 MESc, senior associate at The Forests Dialogue and coordinator of TFD’s events at the COP26 Nature Pavilion. “Despite the excitement around the declaration, it is eerily similar to past agreements that fell short of their goals and has a potential to be a part of a long-standing legacy of world leaders declaring high ambitions with little of substance to implement a plan to meet those goals.”

Shih and Guadagno’s classmate and colleague, Nick Nugent ‘23 MEM, agreed: “I heard some skepticism about whether the Glasgow Declaration could halt net forest loss by 2030, and this skepticism was fueled by the relative ineffectiveness of the 2014 New York Declaration on Forests. Commitments without action are not going to help build solidarity between sectors and countries.” Nugent is a program associate at TFD and heads their Plantations and Water Initiative. 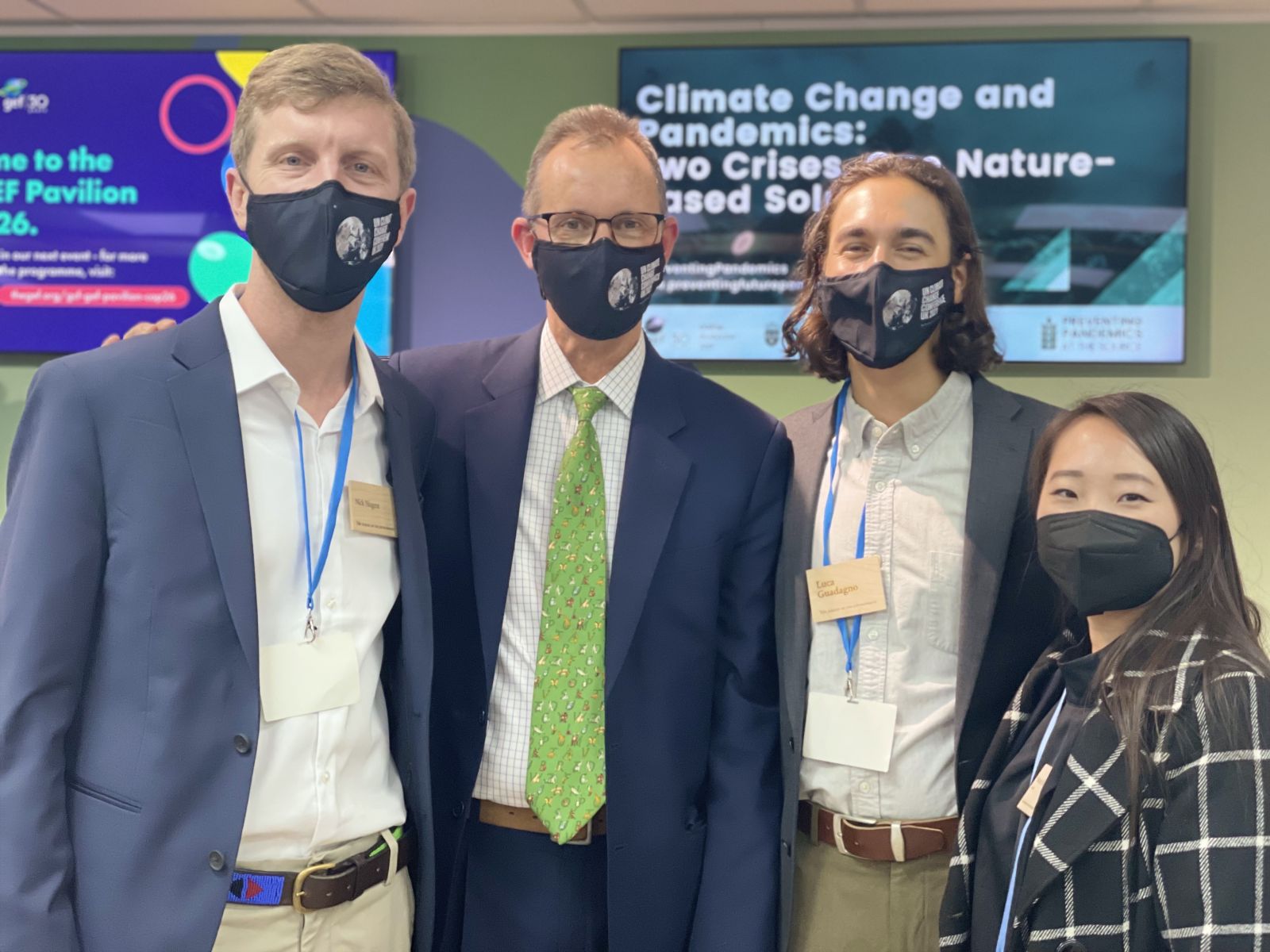 According to Mongabay, comparatively, the Glasgow declaration focuses broadly on forests and terrestrial systems while the New York declaration calls out certain practices, such as ecosystem restoration targets and “names palm oil, soy, paper and beef as the commodities whose production should be disaggregated from deforestation.” Rather than Glasgow’s seemingly global governmental consensus, New York signatories included 39 countries in addition to sub-national jurisdictions, private companies, and NGOs, demonstrating a cross-sector pledge covering 39% of global forest cover from 2010 data. However, the New York Declaration on Forests missed its 2020 goal of a 50% decrease in forest loss by 63-67%.

Yet, for those who have dedicated their careers to forests, there is cautious optimism. “The Glasgow ‘no deforestation’ declaration is a good move and a massive shift from previous commitments of the global community. The financial commitments along with the declaration are impressive,” says David Ganz ‘96 MF, executive director of RECOFTC. “The declaration strengthens countries’ abilities to meet the Nationally Determined Contributions (NDCs) of the Paris Agreement, which are embedded in national policies. This gives more force to the declaration compared to the New York Declaration on Forests, the Consumer Goods Forum, and similar initiatives.”

Cesareo also recognizes the importance of the financial component: “While the $19 billion is a step in the right direction, it is dwarfed by investments that negatively impact forests, including the nearly $800 billion spent over the past decade on finance and subsidies for commodities causing deforestation and nature loss. We need to keep this in perspective and continue to drive for a whole-of-house effort as it relates to forests.”

Guadagno, Shih, and Nugent, as YSE and TFD student representatives at COP26, helped organize and promote TFD’s event, “Forests & forest product innovation for an inclusive net-zero economy.” This was one of the only events to explore forest products explicitly.

“Forests play a critical role in regulating climate, harboring biodiversity, and supporting local communities. Drastically reducing deforestation is critical and urgent. Efforts to do so must be designed and implemented thoughtfully to ensure meaningful results on the ground and to avoid unintended negative consequences,” explains Liza Comita, professor of tropical forest ecology at the Yale School of the Environment and co-director of the Yale Center for Natural Carbon Capture.

Comita’s colleague Professor of Environmental Policy and Governance Luke Sanford is not convinced the declaration will make that drastic reduction in deforestation. “Likely the largest impact the Declaration will have is to mobilize and serve as a pivot for those already working on forest conservation,” expounds Sanford. “Unfortunately, I suspect that it will have little impact outside of that because it does not alter the incentives of those who are directly cutting down forests, or of those who are ultimately responsible for deforestation.”

The Forest School at YSE’s Morris K. Jesup Professor of Silviculture and Forest Ecology Mark Ashton and Margaret K. Musser Professor of Social Ecology Michael Dove believe “reversing deforestation must start with people, not trees” and that pledges such as the Glasgow Declaration “do not address the root causes of deforestation” that are in fact cultural, legal, and economic in nature. “To keep the COP26 commitments will require ground-level solutions that involve local people, land tenure, and markets,” Ashton and Dove write in an op-ed.

Shih agrees that “these pledges need to translate into actions while ensuring a just and equitable transition from a fossil fuel-based economy. It is also imperative to develop an accountability framework for a monitoring and reporting mechanism to ensure that these pledges are met.”

Ganz reminds us that “Indigenous Peoples and local communities must be fully at the table where decisions are made. They must have a prominent role in implementation. And they must have support to ensure they can participate effectively in climate action.”

Notably, “forest communities hold the solutions to protecting the world’s most biodiverse ecosystems yet only 1% of global climate finance is reaching Indigenous Peoples, traditional owners, and local communities,” says Ganz.

As a result, Ganz explains that RECOFTC has joined the Peoples Forest Partnership, a global initiative to support Indigenous Peoples and local communities’ calls to recognize their rights and stewardship and to create equitable, accessible mechanisms to engage with climate and conservation finance. At WWF, Cesareo says her organization is “providing science-based guidance for implementing nature-based solutions with integrity. And we’re also working with corporate partners, Indigenous peoples, local communities, and governments to demonstrate ‘what good looks like’ by designing and implementing high-quality nature-based investment opportunities that deliver for people, nature and climate.”

The ‘trade show’ and the ‘hype machine’

As foresters, we can agree that the world’s forests and their peoples play a pivotal role in shaping the future of life on earth. And more and more, climate change is becoming present in daily life – no matter where we live.

Reflecting on their time in Glasgow, Nugent describes “climate change is an industry and COP is the trade show…But one is left wondering why there is a disconnect between the urgency of saving lives and the slow prioritization of funding for adaptation and loss and damage, for example.” Guadagno describes COP as a “‘hype machine,’ pushing messaging and communication around topics related to climate so other national, subnational, civil society, NGO, and private actors can set their own agendas in alignment with the best information we have.”

Whether the Glasgow Declaration on Forests and Land Use and COP’s ability to be a successful ‘hype machine’ will be fruitful is not yet clear. The clock is ticking, as some say. “The youth are calling for immediate action and countries whose very existences are threatened by climate change are getting desperate. Drastic changes will need to be made to forest product supply chains, and incentive mechanisms will need to promote sustainable forestry practices,” Nugent concludes.