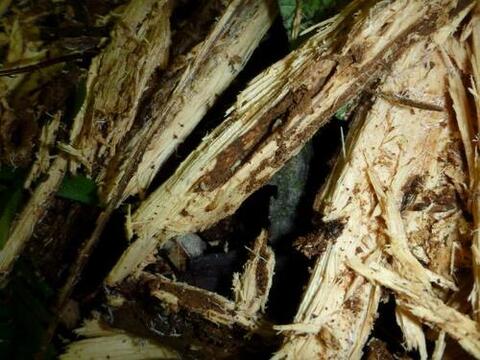 When walking through the woods, we might focus our attention on trees and wildlife. We might notice the crunch of leaves and twigs underfoot – but what is really happening belowground? Specifically, the unseen – not fungi, not microbes, but native termites – and their potential influence on forest ecosystems and carbon flows.

Professor Mark Bradford describes termites native to eastern North America as the “unseen influencers” of the forests, hidden organisms with potentially large consequences. As our resident soil science and ecosystem ecology professor, Bradford describes termites to be out of reach of soil cores, the typical mode of sampling belowground organisms. So, how did he come to centralize termites and their influences in recent research?

When studying relationships between ants that disperse seeds and understory herbs, Bradford and collaborators such as Robert Warren (a Yale postdoc alumnus and professor at SUNY Buffalo State) found that wooden ant nests were riddled with the native termite Reticulitermes flavipes. The fact that coarse woody debris lying on the forest floor is being eaten may come as no surprise, as termites cause $2 billion of damage in cities each year as they cruise through homes and infrastructure. In the woods, termites are living in and eating through dead wood, too, escaping the light (they are “negatively phototropic”) in their subterranean colonies, seemingly out of sight and out of mind.

Warren noted that where termite abundance is high, there was also low abundance of snags, or standing dead trees that are highly valued for the cavities that provide nests for wildlife. Together, Bradford and Warren hypothesized that termites might cause snags to fall faster and therefore asked if their populations were to grow in eastern forests under a warming climate, what effect will this have on our hardwood forests? Bradford set off to ask and answer these questions in his research recently published in Ecology, questions that few others are asking because most scientists do not encounter termites, unless they are deliberately trying to sample soils underneath dead wood, or hatchet open downed trees on the forest floor.

“When you measure something, you only understand it from the way that you measure it.” Bradford explains. “By measuring it a different way, you expand the width of the arc from which you view the question, with the hope that it will expand the partial picture of what is going on in the forest.”

The methods were simple. The team placed wooden posts, or “snags,” throughout study sites in lower and higher elevation forests, where climate conditions approximate more southern versus northeastern forests. In the South, they saw that snags fell more quickly in a warmer climate. For buried wood, every piece was covered in termites, who nest about 1 meter deep. They also noted negative interactions between termites and fungi in snags and coarse woody debris – where there are more termites, there are less fungi, and termites have an effect on wood decay that exceeds that observed when just fungi are present.

Termites don’t like too cold of temperatures, too hard of wood, or too many ants (which eat them!). These factors limit their range and local abundance. But with a changing climate, they may become abundant in Northeastern forests as they warm and become composed of softer wood due to tree species migration. Currently, hardwood snags stand upright on the landscape for a long time, but warmer winters and softer tree species, combined with an increase in termites, will presumably drop and decompose these snags more quickly. This study found where termites are abundant, they have huge consequences for forest structure and diversity. They may even influence how we manage forests that are changing.

As foresters, we recognize the multiple values of forests and leave dead trees standing to provide homes for wildlife. This study puts into question how we think about how much dead wood is on the landscape, asking adaptive silviculture and management to think about whether we’ll need to retain more snags and perhaps even create more, to sustain wildlife habitat.

“When you measure something, you only understand it from the way that you measure.” Bradford explains. “By measuring it a different way, you expand the width of the arc from which you view the question, with the hope it will expand the partial picture of what is going on in the forest.” In widening the arc of soil sampling to incorporate the busyness of termites, this study gives more attention to the unseen part of the forest ecosystem, deepening questions about the unknowns related to carbon stocks in dead wood and forest structures of the future.