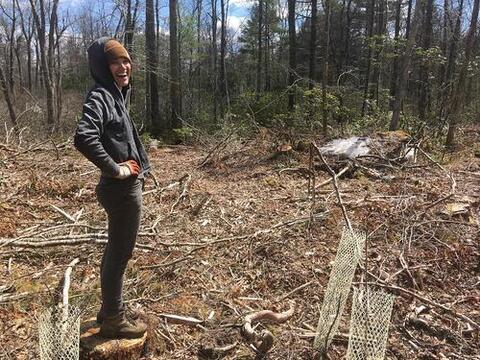 Shortly before COVID-19 began spreading across the globe, Americans received what we hoped would be the worst news of 2020: the Asian Giant Hornet had been spotted in Washington state. Referred to as “murder hornets,” these extremely large wasps feed on local honeybees.

The fear — aside from a painful sting — is that the new pest could threaten honeybee populations across the country, disrupting agricultural economies that depend on the pollinators and their honey. This flying interloper is just the latest on a long list of invasive species from around the world that have found their way into the United States; estimates put that number north of 50,000. The cost of invasion is just as staggering, totaling nearly $120 billion each year. These costs include efforts like invasive plant removal. In natural areas, ranging from National Forests and city parks to privately owned forestland, land managers spend millions of dollars each year on invasive species removal. If you see a plant that shouldn’t be there, the thinking goes, pull it out or spray it with herbicide and your problem is solved.

Eli Ward (MFS ‘18), a PhD student at the Yale School of the Environment, has studied invasive plants for years, in settings ranging from the forests of New England to New York City’s urban parks. And if you asked her, Eli would tell you that it’s not so simple.

Scientists have known for a while that invasive plants are particularly good at invading recently disturbed areas. When a wind storm or insect outbreak kills trees, or a logging road is installed in a forested area, the first plants to appear on the scene are often invasives. These species tend to have certain adaptations—such as rapid growth and profligate seed production—that make them fierce competitors in the battle for growing space.

It’s a little like a school-yard bully stealing your lunch money; he was growing well before, but look out because now he’s eating your lunch.

Other forces can change the soil fertility as well; it turns out that disturbances like logging or a wind storm can mix up the forest soil, potentially setting the stage for an invasive plant bonanza.

Disentangling exactly why invasive plants do so well in disturbed sites — whether it’s the disturbance or the invasive plants themselves responsible for changes in the environment — is what Eli wants to better understand. “You never know what is a cause and what is a consequence,” she said. “That’s my entire field of study.”

To better understand these dynamics, Eli set up an experiment at Yale-Myers Forest in northeast Connecticut. Step one: intentionally plant the invasive species that most forest owners in Connecticut are trying to get rid of.

Eli chose three invasive species particularly troublesome to the region for her study: Japanese honeysuckle, multiflora rose, and Asian bittersweet. She set up research plots in the forest where she planted a mixture of native tree seedlings as well as the invasives. Some areas had just one invasive planted, and in other areas the invasives were planted together. Some research plots were in areas that were logged in 2019, while the rest were in parts of the forest that hadn’t been recently disturbed. Each year she will take measurements to compare how the fertility of the soil changes across all of her plots. Then, after three years, she should have enough data to begin teasing apart which factors are most responsible for changes in soil fertility. Eli’s hope is that her research will shed some light on the specific variables most responsible for invasive species’ success. Armed with this knowledge, land managers who want to control the spread of invasive species might have a fighting chance.

“I’m hoping to bring more nuance to how people think about invasive species and forest disturbance” said Eli. For those who think logging is the problem, Eli is quick to point out the contrary. “There are a broad range of conditions that can arise from forest management,” she said. “And they don’t all lead to invasive plants.”

That being said, there likely isn’t an easy solution to the problem. Invasive species removal will definitely be part of the solution, and according to Eli, “It’s not going to be a one-time event.” We will likely have to learn to live with the majority of invasive species. Just hopefully not those hornets.

This article originally appeared in the Quiet Corner Initiative’s Fall 2020 newsletter produced by the Yale Forests. For more articles like this, visit the newsletter here.