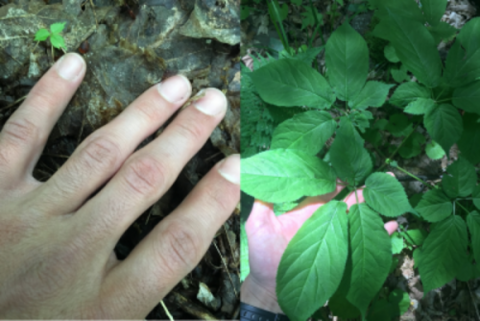 Steve Prinn bought his first bag of American ginseng seed in 2019. He had come across some information online saying that forest landowners could grow the native understory plant in the woods behind their homes. With 47 acres of land in Northeast Connecticut—35 of which are wooded—Steve was always looking for ways to improve the health of his land, stay active, and turn a modest profit. And as far as Steve could tell, planting ginseng in his woods would accomplish all three.

Steve—who moonlights as the caretaker for Yale-Myers Forest—couldn’t find any information locally, so he ordered a few books and started reading everything he could on the subject. That fall, he planted half a pound of ginseng seed in his woods and waited. In the spring, just as he was bottling the last of the season’s maple syrup, he caught sight of little seedlings poking up through the leaf litter: success.

What Steve didn’t realize then was that he was hooked. In 2020, he planted twice the amount of ginseng seed, and he has plans to do even more this coming fall. “You get to a point in life when you’re going to slow down,” he said. “But I’m not there yet.”

But what is it about ginseng, exactly?

American ginseng (Panax quinquefolius) is an understory herb, native to the eastern deciduous forests of North America. It’s a small plant with a big story; used for thousands of years by Native Americans as everything from a deer lure to a love charm, ginseng is also the centerpiece of a 300-year trade history between North America and China. The roots are highly prized across East Asia, where they are used for medicine and even given as gifts, framed against velvet and displayed as symbols of status and significance.

The plant is the stuff of American lore. Daniel Boone famously sunk a two-ton barge-load of ginseng roots, destined for China, in the Ohio River. The roots were so abundant at the time that after losing his haul he simply cut his loses, turned around, and returned to fill his barge back up. Some have gone as far as to argue that the money generated by the export of ginseng roots from the territories that would become the United States helped the fledgling nation fund its independence and debut on the world stage.

In the centuries since Boone’s escapades, harvest pressure on wild American ginseng roots have led to its listing as a controlled species under the Convention on International Trade in Endangered Species (CITES). Still, the high prices paid for the roots—often over $1,000 per pound—keep demand for the slow-growing plant high.

And it’s not just ginseng. Demand for forest-based medicinal herbs—plants such as goldenseal (Hydrastis canadensis), black cohosh (Actea racemosa), and bloodroot (Sanguinaria canadensis)—has skyrocketed since the beginning of the COVID-19 pandemic, the latest uptick in domestic interest in natural plant products. With additional opportunities to sell native forest herbs in horticultural markets and even to your favorite local restaurants, the bounty of the forest understory is making its way onto shelves, tables, and medicine cabinets all over the country.

These commercial opportunities and the subsequent pressure placed on wild plant populations has led to a growing interest in forest farming, the intentional cultivation of plants under a forest canopy. And in some regions, this interest is being met with educational opportunities. Since 2015, the Appalachian Beginning Forest Farmer Coalition (ABFFC) has been promoting the adoption of forest farming across Appalachia. By hosting in-person workshops, posting instructional videos, and conducting research, the ABFFC has helped thousands of forest landowners start forest farming on their properties.

The practice of forest farming is a type of agroforestry, defined by the USDA as “the intentional integration of trees and shrubs into crop and animal farming systems to create environmental, economic, and social benefits.” These benefits include everything from increased farm income and crop diversity to large-scale carbon sequestration. Planting at-risk native species in your forest understory also takes pressure off of wild plant populations, a concept referred to as “Conservation through Cultivation.”

Given these benefits, you might wonder why you’ve never heard of agroforestry or forest farming. Well, you’re not alone: just like no one had ever heard of an oat milk latte until sometime after 2017, a major barrier farmers face when it comes to adopting agroforestry on their own farms and forests is a lack of accessible information and assistance. Despite the efforts of the ABFFC, when it comes to forest farming in the Northeast, resources are few and far between, and many would-be forest farmers are falling through the cracks. For Steve Prinn, learning how to forest farm was a self-guided pursuit “I would just Google ‘growing ginseng’ and see what turned up,” Steve said.

An article published this past winter in The Maine Monitor quoted farmer Max Boudreau of Winslow Farm in Falmouth, Maine corroborating Steve’s experience in struggling to access resources. In the article, Boudreau said he saw a need for a “northeastern equivalent of the Appalachian Beginning Forest Farmer Coalition” in order to “have more coordination among those already doing agroforestry.”

Well, this is exactly what a new initiative at The Forest School seeks to do.

In 2021, The Forest School at Yale School of the Environment was awarded a $250,000 grant through the USDA Sustainable Agriculture Research and Education (SARE) program, to conduct forest farming research and provide landowner education around the practice. The project will be led by Karam Sheban ‘20 MF, a post-graduate researcher at The Forest School at YSE, along with faculty members Marlyse Duguid ‘10 MF, ‘16 PhD and Joseph Orefice ‘09 MF, Directors of Research and Forest & Agricultural Operations, respectively, at the Yale Forests. Before attending YSE for his Master of Forestry degree, Sheban worked with the ABFFC to promote forest farming in his home state of Ohio and beyond, and he conducted his master’s research on ginseng cultivation in the Catskill Mountains of New York.

Through this new initiative, called the Northeast Forest Farmers Coalition, project leaders will help establish a community of forest farmers across the Northeast. Project partners—including Cornell and Penn State Universities as well as nonprofit and farm partners—will host forest farming research and demonstration sites, ranging across West Virginia, Pennsylvania, New York, Connecticut, and Vermont. Annual workshops will provide prospective forest farmers with the information they need to start an operation of their own—site selection, species biology, harvesting and post-harvest handling, product development and marketing, and more.

The Northeast Forest Farmers Coalition will join the recent addition of a Maple Education and Extension program as an additional extension effort offered through the Yale Forests. These programs share the goal of promoting the adoption of temperate agroforestry systems throughout the Northeast. As a partnership with the ABFFC, the Northeast Forest Farmers Coalition will expand forest farming resources and education into the Northeast, and lay the groundwork for the widespread adoption of forest farming across the region.

These initiatives come at an inflection point for the university. In 2020, the School underwent a name change, creating The Forest School within the Yale School of the Environment. The new Forest School is dedicated to the sustainable management of our planet’s forest resources, and the Northeast Forest Farmers Coalition hews to this mission. And in an era of global climate change and widespread biodiversity loss, we need strategies that confront these crises while maintaining working lands and the livelihoods they support.

The Northeast Forest Farmers Coalition is recruiting forest landowners already interested in forest farming, as well as those who may never have heard of the practice. Whether you’re a full-time farmer with a few acres of underutilized woods or a forest landowner with a day job looking for a way to improve the ecological health of your property, forest farming is for you.

Just ask Steve Prinn, who feels that spreading the word is the first step in promoting the practice.

“My gut feeling is that people have interest, but they don’t have any information about it,” said Steve. “If they’re aware forest farming is a viable option for them, then there’s a lot of people that I believe would jump on the opportunity to get started.”

For more information on the Northeast Forest Farmers Coalition and how to get involved, contact Karam Sheban at karam.sheban@yale.edu.