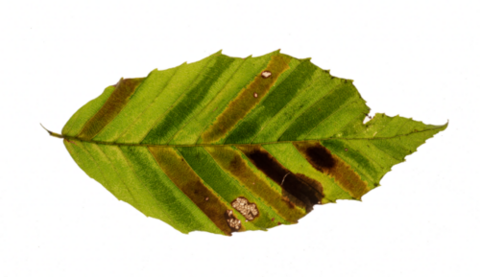 Most trees have by now dropped their leaves. Yet, the leaves of the beech tree (Fagus grandifolia) persist – pale and husky. They help us identify the tree out in the woods — not that we need much assistance. Beeches, with their smooth gray bark and lance-like buds, are as beautiful as they are ubiquitous. The species stretches from eastern Texas along the coast to southern Canada. They grow in number as you approach the hardwood forests of the North, where fully grown beeches make up many of the region’s climax communities.

Beeches provide food to all sorts of wildlife. A hard mast tree, their nutty fruit are calorific and full of oils. These seeds last through the winter and serve as a food source to critters like deer when other plants have long stopped producing fruit. Because of their beauty and significance, many scientists are concerned about a new pathogen spreading throughout the species – beech leaf disease (BLD).

Beech leaf disease was first observed in Ohio in 2012. It’s now easy to spot throughout New Haven and the Northeast at large. What to look for? A conspicuous symptom of BLD is the dark, parallel banding between the veins of beech leaves. You can see this phenomenon in the photo supplied here by The Forest School at Yale School of the Environment’s Professor of Plant Physiological Ecology Craig Brodersen. The cause of BLD was only recently discovered. It is the foliar nematode Litylenchus crenatae mccannii. These worm-like microscopic creatures live in the leaves of the tree. According to the Connecticut Tree Protective Association’s 2021 Beech Leaf Disease Update, severe symptoms of BLD include premature leaf drop and branch and tip dieback.

Seven out of eight Connecticut counties have reported beech leaf disease, but it seems to be absent thus far in Yale-Myers Forest located in northeast Connecticut. Dr. Robert Marra of the Connecticut Agricultural Experiment Station is a leading expert in the unfolding disease. He has set up several plots to monitor BLD, including one at Yale-Myers. Because there are not many Beech trees in that area, this plot serves as a sentinel. Marra suspects that birds may be a vector of the disease – he’s confirmed BLD five miles off the coast on Fisher’s Island. How else could the disease cross the ocean?

While Yale-Myers Forest doesn’t show signs of BLD at this point, the prospect is on the minds of many. Yale Forest’s Director of Forest and Agricultural Operations Joe Orefice explained to me that chemical treatments for pathogens, when and if they are developed, can be cost-prohibitive and damaging to the environment when applied to an entire forest. In the face of plant pathogens, forest diversity is often your best bet. In places like New England, where most woods are privately owned, the future of our forests seems to rest in the hands of landowners. The Forest School’s Quiet Corner Initiative seeks to engage landowners in the region with newsletters, workshops, and free speaker series. It has hosted free seminars on a variety of issues like forest health. Yale-Myers Forest itself is managed for healthy, vigorous individual trees. A wide range of ages and classes are grown to help build resilience from disease and other disturbances.

Foresters have often prematurely cut down individual trees at risk of catching a ravaging plant disease, while the wood can still be sold. This practice, called ‘salvage logging,’ runs the risk of removing trees with natural immunity from the ecosystem – and their disease-resistant genes. “We have to give beeches a chance to adapt,” Orefice stresses. Salvage logging was widely practiced with American chestnut and ash, which were struck by the chestnut blight and emerald ash borer. However, beech is not a tree with much commercial value. Perhaps it will be spared a similar fate.

Director of Research at Yale Forests Marlyse Duguid shared with me the uncertainties of emerging forest health issues. Chestnut blight and Dutch elm disease changed the landscape remarkably. In fact, New Haven’s nickname the Elm City refers to the prevalence of elms before the disease took hold. We don’t know which diseases will be disastrous and which may cause minimal damage. Duguid remarks that when she was a student at YSE, the Asian Longhorn Beetle was a top concern. People didn’t seem to pay as much attention to another invasive insect, one much smaller and far away in Michigan. This insect was the emerald ash borer, and it is now decimating ash trees throughout the East. Rotting snags stand where these beautiful trees once flourished.

Many older beech trees are already impacted by another disease, known as beech bark disease. “The beeches are already sick,” Duguid says, “in the northern hardwood forests. They grow suckers of sapling and form large, clonal mats.” If this is sounding like a scene from a horror movie, it might as well be. No longer growing into the canopy, beeches in Northern hardwood forests may shade out other species and inhibit forest regeneration.

Duguid wonders if closely related species like oaks could be at risk to the pathogens affecting beeches. Are the nematodes behind beech leaf disease reliant on beech alone, or are beech trees merely their preference? Furthermore, BLD can also infect European beech (Fagus sylvatica). The disease has not yet been reported in Europe, but it would be devastating. Beeches are an important and widespread tree on the continent.

According to Marra, it’s too soon to tell the long-term effects of BLD on tree physiology. For, instance, how might beech bark disease and beech leaf disease interact? Studies like these are the objective of his long-term research. Already, we know that young trees impacted by BLD can die after only a few years. It can take beeches 40 years to produce the significant masses of fruit that many animals rely on for food and the beeches themselves for reproduction.

When I witness beech leaf disease, I am reminded that the forests we know and love are not guaranteed fixtures. They are dynamic and their health echoes through interlinking ecosystems. Rather than reacting to forest health issues, how can we meet them proactively?

“The sad part is that it is somewhat preventable,” Orefice says. While the origins of BLD are yet to be known, many plant pathogens stem from invasive species. “We need to stop trading live plants and soil, and wood that hasn’t been treated… When are we going to learn our lesson?”

It’s winter now, but the beech continues to hold its leaves. The dark banding of beech leaf disease is visible even now. Yet there are young buds. They remind us we still have time.