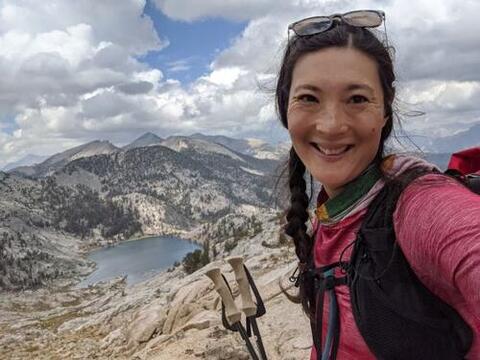 Liz Thomas ’10 MESc is an avid through-hiker, writer, and conservationist. In 2011, after graduating from YSE, she broke the women’s unsupported speed record on the Appalachian Trail. She’s considered one of the most experienced hikers in the US. Her work is to make the outdoors a space where everyone feels like they have a home.

Thomas has written multiple books on through-hiking, focusing on ways to explore which are safe and comfortable for all levels of physical ability.  She has also helped pioneer the tool of urban through-hiking as an experiential education tool, and now works with Treeline Review, an organization dedicated to spreading information about sustainable and accessible outdoor gear. She’s passionate about reducing barriers to entry for people to have the kind of immersive, extended experiences in nature, which can be transformative in their understanding of their own existence within the natural world. This has been the focus of much of her writing and advocacy since leaving YSE. 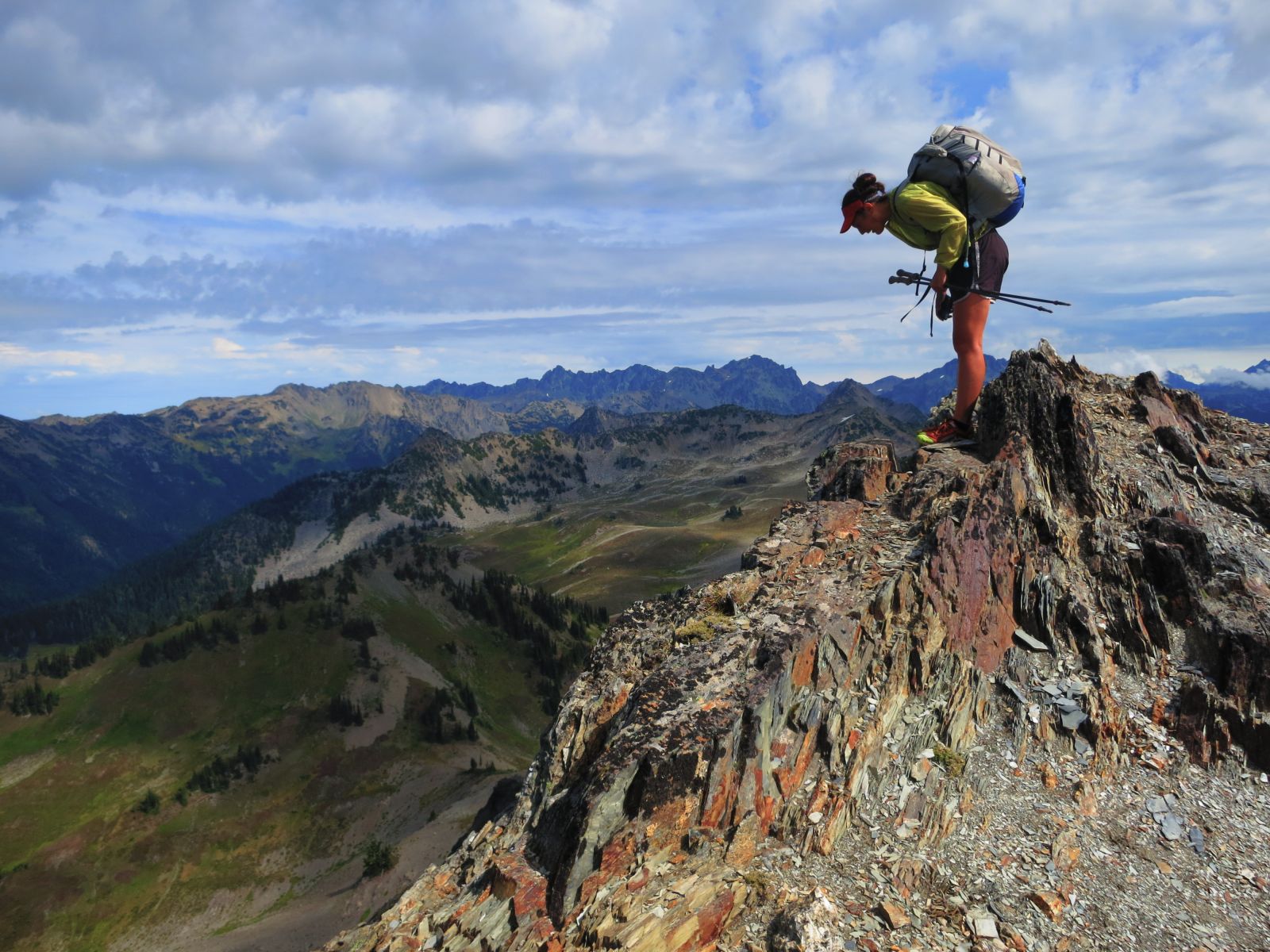 Forest Fellow Sara Santiago ’19 MF and TFS Communications Associate Isaac Merson ’23 MEM sat down with Thomas to discuss her experience as a through-hiker and her role as a founding member of The Outdoorist Oath.

The Oath is a newly formed organization, centered around a commitment by outdoor recreators to the planet, to inclusion, and to expanding the definition of what outdoor adventure means. Beginning in 2021, the Oath has begun holding workshops where outdoor enthusiasts can deepen their knowledge about responsible outdoor recreation and then take the oath to join the organization. 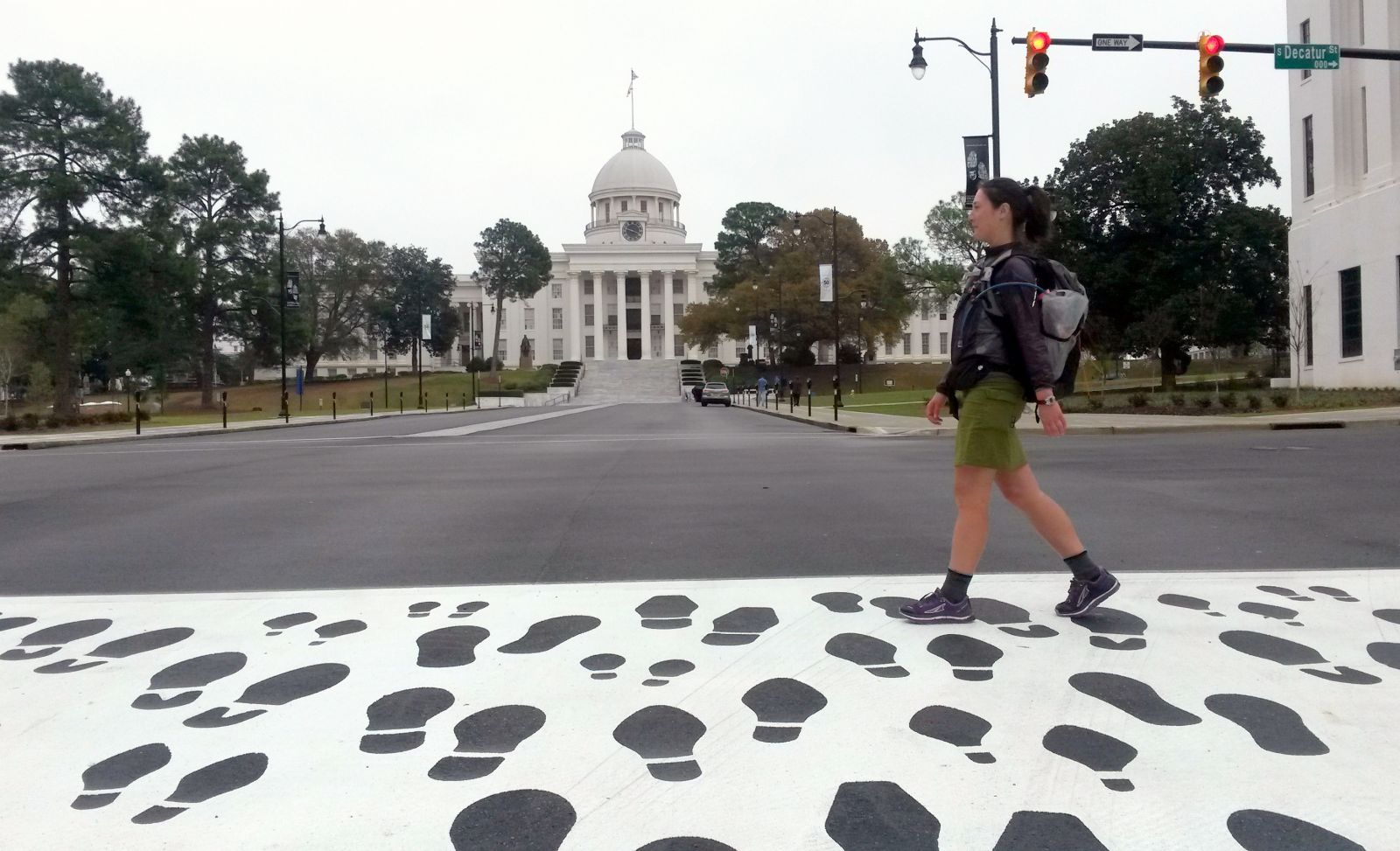 Dedicated to accessible hiking for all in both urban and rural environments, Thomas walks the Selma to Montgomery National Historic Trail. Photo by Dave Mullins.

Thomas as an Urban and Rural Through-Hiker

Sara Santiago: Hi Liz, could you introduce yourself a little bit to our community?

Liz Thomas: I’m Liz Thomas of the Class of 2010. I use she her pronouns. I live in Southern California right now on the land of the Tongva, and I am a professional through-hiker and an environmental writer and editor that focuses on the outdoor space and creating a place where we can get more people outdoors. I think one of the things about my time at YSE that really resonated with me is that time that we do spend outdoors, for many people it’s an activation point. And for some people, it happens at a younger age, for some people, it’s as an adult, but being outdoors and seeing that direct connection between ourselves and the natural environment can be a point where people start thinking about hey, my everyday actions or political actions or global actions have an impact on something besides just me.

SS: We were struck by this beautiful photo of you walking through Selma, Alabama, on an urban hike. We are wondering if there are specific justice and inclusion issues that are more present for you and pressing in your hikes or in this work?

LT: My urban through-hikes are very much focused on trying to create spaces where we can spark conversations about our built environment. Particularly, how our built environment impacts not just nature, but people, and the decisions that we’ve made about our built environment that have segregated us, that have marginalized certain groups. So when I’m on an urban hike, hiking day after day, for several weeks, I start to be able to read this sort of urban environment in the same way that, you know, Professor Mark Ashton will walk into a forest and be like, “oh, you know, 400 years ago, there was this old farm field here.” And you’re like, how do you know that? It kind of feels the same way in the urban environment, where you’re might notice: “oh, you can tell this was a red line here.” Our history impacts the space that we’re walking through. And those conversations are a lot easier on urban hikes, which people will come along to because they’re like, “Oh, I live here anyway, sure. I’ll walk a couple miles with you.” And we really have those conversations about, why does this space look like it does?

Thomas as a Founding Member of The Outdoorist Oath

SS: How did you become involved with The Outdoorist Oath?

LT: One thing to know is that the community of people who are doing work related to DEI (Diversity, Equity, and Inclusion) and JEDI (Justice, Equity, Diversity, and Inclusion) in the outdoors generally know each other. And so when the Outdoorist Oath was beginning, it was really a matter of who is already advancing this work and talking about it. And one of the cool things I think about the Outdoorist Oath is, it’s not just about DEI. It’s also taking the environmentalist message along with it, and it’s also looking at the importance of wonder and enjoyment and adventure and having fun no matter how we define that. It’s the joy that really is the activation point for people caring about nature and caring about each other. So I think that’s been forgotten before and is one of the cool things about the Oath.

SS: We were also wondering if you might give us a preview of what the oath workshops hold and what folks might expect to attend, if they attended?

LT: I think one of the things that I enjoyed the most was the space to really brainstorm what exactly our relationship is with the environment and with each other, and how we can activate these parts: between the environment, between inclusivity and our own skillsets and adventure. To benefit something beyond just ourselves. One of the really great things about where we are right now is the availability of affinity groups as related to the outdoors. I think that’s been really important to create spaces where people feel seen and where they feel safe, going into the outdoors. 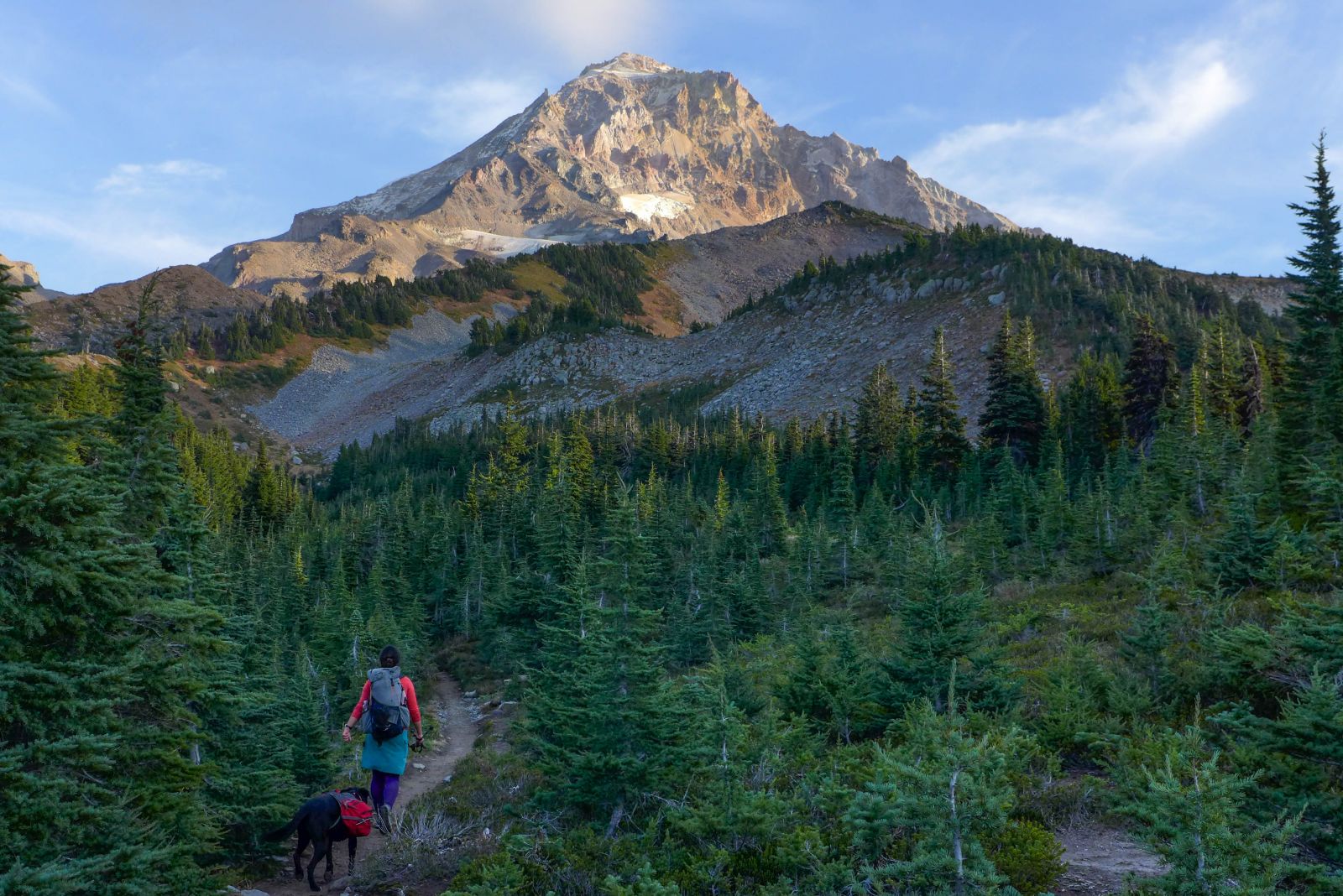 Thomas, pictured hiking the Mount Hood Timberline Trail, is dedicated to understanding the history, colonization, and current realities of the land we hike. Photo by Kate Hoch.

Thomas In the Forests

SS: We’d also like to touch on forests, because that’s the heart of the School. And we all like to think of ourselves as foresters, so we’re wondering if forests play any specific or special role in your connection to the environment, whether they’re in these big kind of ‘wild’ landscapes versus the urban canopy?

LT: The Urban Canopy is such an indicator of segregation, of the inequities that happen in cities. While urban hiking, if it’s warm out, I can definitely feel the difference between walking in a neighborhood that has a very dense urban canopy and a neighborhood that doesn’t and that’s the heat island effect. It’s a very easy starting point to have those discussions about something that we need to think about on a policy level. There’s so much to be said about in a more wildland sort of aspect as well. One of the things I’ve been thinking a lot about in forests is climate change, and the impact on the forest, especially in the West. Wildfires are impacting all sorts of recreation, especially in the West. And I think it’s caused a lot of people who maybe weren’t talking about climate change to be like, ‘Okay, this is not just something that’s happening in abstract places anymore. This is impacting me.’ And unfortunately, humans often will need to see the impact themselves in order to be activated to make change and to become advocates.

There’s [also] this idea of “wilderness landscapes,” especially in the West. I’m on the board for the Partnership for the National Trail System, and one of the things that I’ve really been advocating for is talking about the history of the land and the colonial history of the land. Trying to encourage land managers, for example, to do Land Acknowledgments, to really look into the people whose land this is, and to tell those stories. 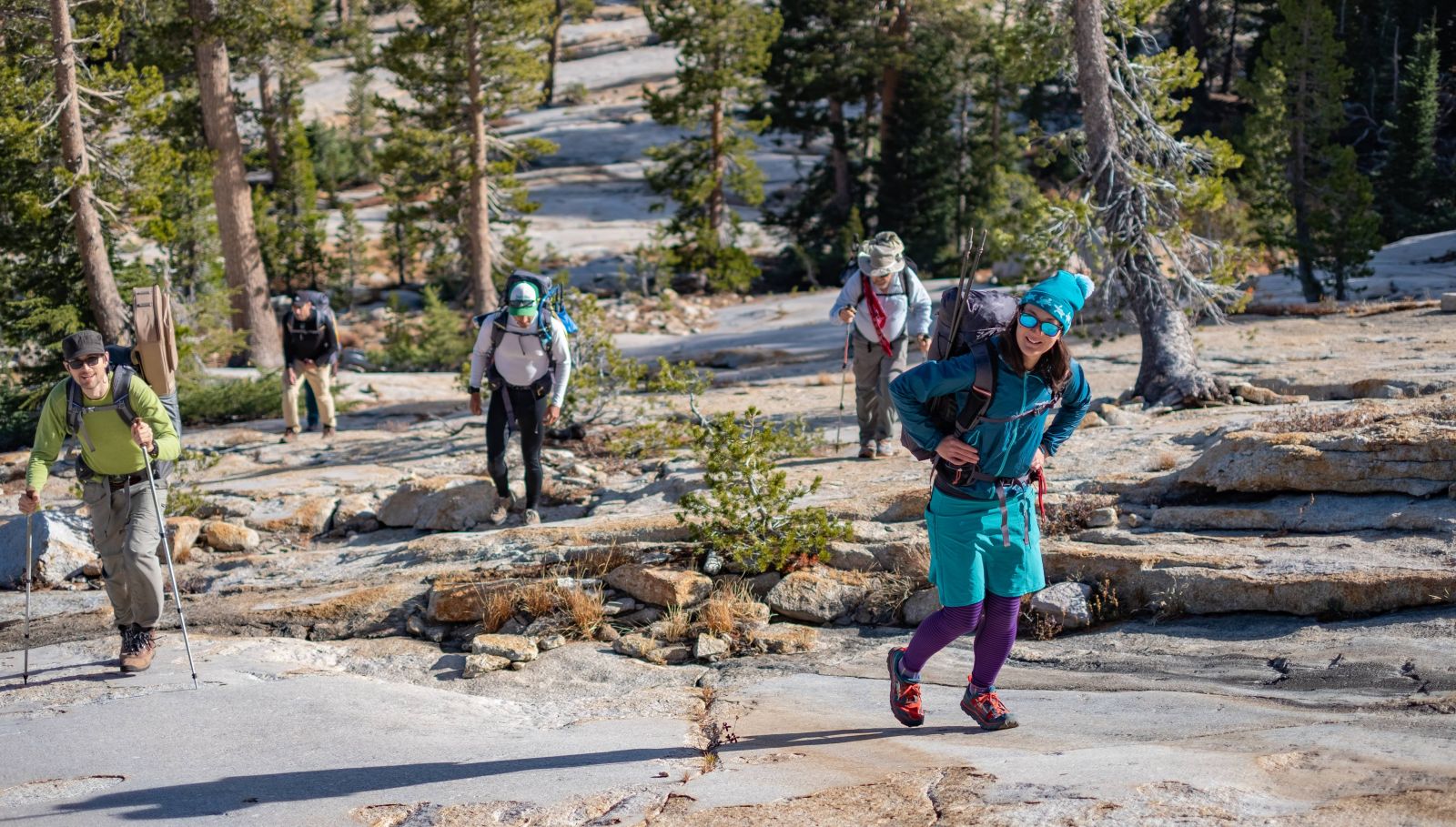 Thomas, hiking in the Sierra Nevada Mountains, strives to create space for people of color to feel at home in the outdoors. Photo by Duncan Cheung.

Her Dreams for the Future

SS: When you dream about the future of outdoor adventure and experience, what do you imagine?

LT: I want to imagine a world where there aren’t barriers to entry to being outside. Part of that is accessibility, both in getting access to the outdoors, but also creating outdoor spaces where people with different abilities are feeling comfortable and feeling like they can really enjoy the benefits of nature. A lot of it has to do with creating spaces where people from traditionally underrepresented backgrounds feel as comfortable going into outdoor spaces as they would going into urban spaces.

My dream is that at some point, the people who are going on these hikes will be like, ‘I’ve been here enough times with this group. And this is my space’, to really feel that sense of belonging in nature. One more thing about affinity groups is that I didn’t explicitly identify as Japanese American [in this interview]. And I was chatting with one of my friends who’s Sri Lankan-Canadian, and we were like, ‘I really hope that our generation is the last generation of people who want to go on a long backpacking trip, and really have to struggle to find other people of color who have done this experience before and who can be role models.’ I hope it is already becoming a reality that when someone is like, ‘it’d be really cool to walk from this point to 1,000 miles away, has anyone who looks like me ever done something like this?’ To be like, ‘oh, yeah, there’s Liz.’ That’s, that’s my dream.

Liz Thomas received the Doris Duke Conservation Fellowship for her research on trails, conservation, and gateway communities during her time at YSE. She was Editor in Chief of SAGE Magazine. She currently serves on the Board of Directors for the Partnership for the National Trail System and the Roberts Environmental Center at Claremont McKenna College. She’s former Vice President of the American Long Distance Hiking Association-West and is a current ambassador of the American Hiking Society.